The Influence of the Roman Law on the Law of England: Being the Yorke Prize Essay of the ... (Paperback) 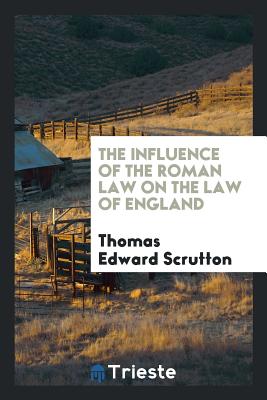 Books about the History of Great Britain follow the historical developments and ultimate union of England, Scotland, Wales and Northern Ireland. After centuries of Roman rule, in 1066 England was invaded by the Normans, and in 1707 England, Scotland and Wales formed the United Kingdom. The British Empire came to occupy one-quarter of the earth's land surface, but was weakened by World War 1, and was dismantled shortly after World War 2. Titles include: A Short History of England, Ireland, And Scotland, Ancient Britain in the Light of Modern Arch ological Discoveries, The Legal Code of lfred the Great, Documents Illustrative of Sir William Wallace: His Life and Times, Edward the First, A short history of English rural life from the Anglo-Saxon invasion to the present time, Condition of the Border at the union: destruction of the Graham clan, A Historical Account of the Belief in Witchcraft in Scotland, Guy Fawkes; Or, a Complete History of the Gunpowder Treason, History of Mary Queen of Scots, Huntingdonshire and the Spanish Armada, Memorable Wars of Scotland, King Edward VII as a Man and Monarch, Sir Francis Drake, Sir Walter Raleigh, The Parliamentary Generals of the Great Civil War, Oliver Cromwell: The Story of His Life and Work, and The Foundation and Growth of the British Empire.

Trieste Publishing's aim is to provide readers with the highest quality reproductions of fiction and non-fiction literature that has stood the test of time. Our titles are produced from scans of the original books and as a result may sometimes have imperfections. To ensure a high-quality product we have:

You can look up "Trieste Publishing" in categories that interest you to find other titles in our large collection.

Come home to the books that made a difference