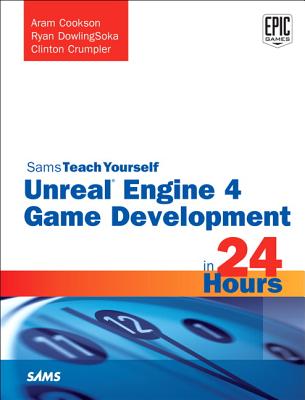 In just 24 lessons of one hour or less, learn how to start using Unreal Engine 4 to build amazing games for Windows, Mac, PS4, Xbox One, iOS, Android, the web, Linux-or all of them Sams Teach Yourself Unreal Engine 4 Game Development in 24 Hours' straightforward, step-by-step approach shows you how to work with Unreal Engine 4's interface, its workflows, and its most powerful editors and tools. In just hours you'll be creating effects, scripting warfare, implementing physics-even developing for mobile devices and HUDs. Every lesson builds on what you've already learned, giving you a rock-solid foundation for real-world success.
Step-by-step instructions carefully walk you through the most common Unreal Engine 4 game development tasks.
Practical, hands-on examples show you how to apply what you learn.
Quizzes and Exercises help you test your knowledge and stretch your skills.
Notes and tips point out shortcuts and solutions. All the project files and assets you'll need are available for download, including before-and-after files demonstrating initial setup and proper completion for every exercise.

Aram Cookson is a professor in the Interactive Design and Game Development (ITGM) department at the Savannah College of Art and Design (SCAD). He has a B.F.A in Sculpture and an M.F.A. in Computer Art. After finishing his M.F.A., he went on to help start the ITGM program and served as the graduate coordinator for 9 years. Over the past 15 years, Aram has developed and taught a range of game art and design courses in classrooms and online, utilizing the Unreal Engine technology. Ryan DowlingSoka is a technical artist working on the Gears of War franchise at Microsoft Studio's The Coalition, located in Vancouver, British Columbia. He works primarily on content features for the team, crafting systems for destruction, foliage, visual effects, postprocesses, and user interfaces in Unreal Engine 4. Previously, he worked at Microsoft, developing experiences for the Microsoft HoloLens in Unity5. Ryan is an expert in a variety of entertainment software creation packages, including Maya, Houdini, Substance Designer, Photoshop, Nuke, and After Effects. Ryan holds a B.F.A. in Visual Effects from Savannah College of Art and Design. With a passion for interactive storytelling, rooted in playing 1990s console role-playing games ( Baldur's Gate II and Planescape: Torment), Ryan focuses on applying interactive technical solutions to solving difficult problems in modern gaming. When not working on video games, Ryan can be found swing dancing his evenings away with his wife. Clinton Crumpler is currently a senior environment artist at Microsoft Studio's The Coalition, located in Vancouver, British Columbia. Previously an artist at Bethesda's Battlecry Studios, KIXEYE, Army Game Studio, and various other independent studios, Clinton's primary focus areas are environment art, shader development, and art direction. Clinton has released multiple video tutorials in collaboration with Digital Tutors, with a focus on game art development for Unreal Engine. He completed an M.F.A. in Interactive and Game Design and a B.F.A. in Animation at Savannah College of Art and Design (SCAD) in Savannah, Georgia. Prior to attending SCAD, he received a B.F.A. in Graphic Design at Longwood University, located in Farmville, Virginia. More information and his digital works are available at www.clintoncrumpler.com.