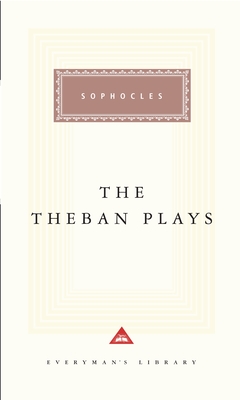 By Sophocles, Charles Segal (Introduction by), David Grene (Translated by), James P. Hogan (Notes by)
$22.00
Email or call for price.

The legends surrounding Oedipus of Thebes and his ill-fated offspring provide the subject matter for Sophocles’ three greatest plays, which together represent Greek drama at the pinnacle of its achievement.

Oedipus the King, the most famous of the three, has been characterized by critics from Aristotle to Coleridge as the perfect exemplar of the art of tragedy, in its unforgettable portrayal of a man’s failed attempt to escape his fate. In Oedipus at Colonus, the blind king finds his final release from the sufferings the gods have brought upon him, and Antigone completes the downfall of the House of Cadmus through the actions of Oedipus’s magnificent and uncompromising daughter defending her ideals to the death. All three of The Theban Plays, while separate, self-contained dramas, draw from the same rich well of myth and showcase Sophocles’ enduring power. Translated by David Grene.

Sophocles, the Greek tragic dramatist, was born at Colonus near Athens about 496 B.C. Although hopelessness and misfortune plague the characters in his great plays, Sophocles's own life was a long, prosperous one. He was from a good family, well educated, handsome, wealthy, healthy, and highly respected by his fellow Athenians. His first dramatic production, in 468, won the prize over Aeschylus's. He wrote two dozen more plays before 450, by which date he had made important changes in the form of tragedy by adding a third speaking actor to the traditional two, by reducing the importance of the chorus, and by improving the stage scenery. Sophocles wrote over 120 plays; seven complete plays survive (plus half a light satyr play, some fragments, and ninety titles). Aristotle, in his Poetics, praised Sophocles above other tragedians and regarded his masterpiece, Oedipus the King, as a model for Greek tragedy. Sophocles's plays won more victories than the plays of either his older contemporary Aeschylus or the younger Euripides. The circumstances of his life, as well as his plays, suggest that Sophocles was conservative, and opposed to innovation in religion and politics. At eighty-three he was still active in the Athenian government. He died in 406 B.C. in Athens at the age of ninety.

“[Oedipus the King] is Sophocles’ most famous play and the most celebrated play of Greek drama . . . Aristotle cites it as the best model for a tragic plot . . . Freud recognized the play’s power to dramatize the process by which we uncover hidden truths about ourselves . . . Sophocles is more interested in how Oedipus pieces together the isolated fragments of his past to discover who and what he is and in tracing the hero’s response to this new vision of himself.”—from the Introduction by Charles Segal