Ka: Stories of the Mind and Gods of India (Vintage International) (Paperback) 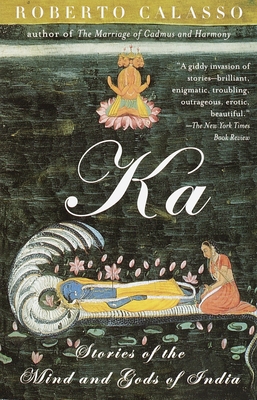 With the same narrative fecundity and imaginative sympathy he brought to his acclaimed retelling of the Greek myths, Roberto Calasso plunges Western readers into the mind of ancient India. He begins with a mystery: Why is the most important god in the Rg Veda, the oldest of India's sacred texts, known by a secret name--"Ka," or Who?
What ensues is not an explanation, but an unveiling. Here are the stories of the creation of mind and matter; of the origin of Death, of the first sexual union and the first parricide. We learn why Siva must carry his father's skull, why snakes have forked tongues, and why, as part of a certain sacrifice, the king's wife must copulate with a dead horse. A tour de force of scholarship and seduction, Ka is irresistible.

"Passage[s] of such ecstatic insight and cross-cultural synthesis--simply, of such beauty."  --The New York Review of Books

"All is spectacle and delight, and tiny mirrors reflecting human foibles are set into the weave,turning this retelling into the stuff of literature." --The New Yorker

"The very best book about Hindu mythology that anyone has ever written...A magnificent reading of Hindu texts. Its power arises in part through strong, vivid writing and in part through stunning, unexpected metaphors."
--Wendy Doniger, The New Republic

"A scintillatingly challenging book...Its opening sentences are as startling as any in all of literature."
--Thomas McGonigle, Los Angeles Times

"All is spectacle and delight, and -tiny mirrors reflecting human foibles are set into the weave, turning this retelling into the stuff of literature...Calasso's erudition and his capacity for invention appear to be limitless."
--The New Yorker

"This riveting performance (rendered beautifully into English by Tim Parks) is the fruit of a union
between serious scholarship and a mercurial imagination."
--Donna Seaman, Booklist

"Calasso has certainly managed to open a new road through the old landscape of literature."
--John Banville, New York Review of Books