Love Is a Mix Tape: Life and Loss, One Song at a Time (Compact Disc) 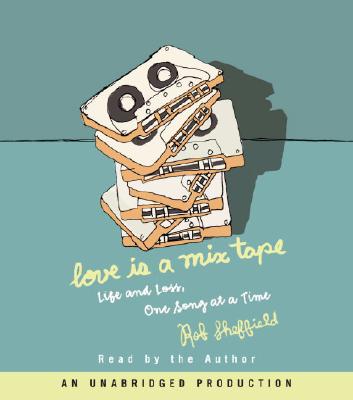 What Is love? Great minds have been grappling with this question throughout the ages, and in the modern era, they have come up with many different answers. According to Western philosopher Pat Benatar, love is a battlefield. Her paisan Frank Sinatra would add the corollary that love is a tender trap. Love hurts. Love stinks. Love bites, love bleeds, love is the drug. The troubadours of our times agree: They want to know what love is, and they want you to show them. But the answer is simple: Love is a mix tape.

In the 1990s, when “alternative” was suddenly mainstream, bands like Pearl Jam and Pavement, Nirvana and R.E.M.—bands that a year before would have been too weird for MTV- were MTV. It was the decade of Kurt Cobain and Shania Twain and Taylor Dayne, a time that ended all too soon. The boundaries of American culture were exploding, and music was leading the way.

It was also when a shy music geek named Rob Sheffield met a hell-raising Appalachian punk-rock girl named Renée, who was way too cool for him but fell in love with him anyway. He was tall. She was short. He was shy. She was a social butterfly. She was the only one who laughed at his jokes when they were so bad, and they were always bad. They had nothing in common except that they both loved music. Music brought them together and kept them together. And it was music that would help Rob through a sudden, unfathomable loss.

In Love Is a Mix Tape, Rob, now a writer for Rolling Stone, uses the songs on fifteen mix tapes to tell the story of his brief time with Renée. From Elvis to Missy Elliott, the Rolling Stones to Yo La Tengo, the songs on these tapes make up the soundtrack to their lives.

Rob Sheffield isn’t a musician, he’s a writer, and Love Is a Mix Tape isn’t a love song- but it might as well be. This is Rob’s tribute to music, to the decade that shaped him, but most of all to one unforgettable woman.

• ?;"No rock critic- living or dead, American or otherwise- has ever written about pop music with the evocative, hyperpoetic perfectitude of Rob Sheffield. Love is a Mix Tape is the happiest, saddest, greatest book about rock'n'roll that I've ever experienced."
–Chuck Klosterman, bestselling author of Fargo Rock Cty, Sex, Drugs, and Cocoa Puffs, Killing Yourself to Live and Chuck Klosterman IV

"This is a lightly-handed, skillful and sincere celebration of pop, of love, sad songs, bad songs and the long, nearly unbearable ache of being a young widower. Witty and wise; a true candidate for the All-Time Desert Island Top 5 Books About Pop Music."
–Kirkus, starred review

"I can't think of many books as appealing as Rob Sheffield's Love is a Mix Tape; Sheffield writes beautifully about music, he's hilarious, and his story is alternatingly joyous and heartbreaking. Plus, everyone knows there's no better way to organize history and make sense of life than through the mix tape."
–Haven Kimmel, bestselling author of She Got Up Off the Couch, A Girl Named Zippy and The Solace of Leaving Early

“A celebratory eulogy of life ‘in the decade of Nirvana.’”–Publishers Weekly « starred review

“Sheffield's description of Renée’s brilliant eccentricity and lovable quirkiness causes the reader to fall in love with her just as he does.”–Library Journal « starred review

"A glorious elegy to a pop culture-blessed decade and a tender, unforgettable tribute to the power of love" - The Miami Herald