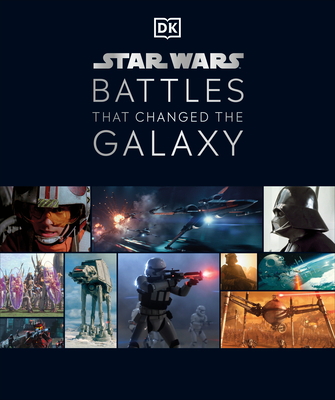 Explore the “Wars” in Star Wars as never before!

Enter a galaxy ravaged by conflict and discover the complete story of the epic struggles that define the Star Wars movies. This ambitious book presents major galactic conflicts from an in-world “historical” perspective: each battle is depicted with captivating imagery, explored with newly commissioned maps, and explained through a detailed analysis of tactics, famous commanders, legendary warriors, key moments, and its impact on wider galactic history.

This is the perfect book for any Star Wars fan, budding military historian, or would-be rebel hero!

Cole Horton is the author or co-author of a dozen Star Wars books, including Star Wars: Absolutely Everything You Need to Know and Star Wars Galaxy's Edge: A Traveler's Guide to Batuu. He has contributed to StarWars.com, Marvel.com, and runDisney. As a brand manager and consumer researcher, he has worked on a number of video games including Star Wars: Galaxy of Heroes, Star Wars Battlefront II, and Star Wars Jedi: Fallen Order.

Jason Fry is the author of more than 50 books and short stories set in the Star Wars galaxy, including The Weapon of a Jedi, The Essential Atlas, the Servants of the Empire quartet and the novelization of The Last Jedi. He is also the author of the Jupiter Pirates space-fantasy series. He lives in Brooklyn, N.Y., with his wife, son and about a metric ton of Star Wars stuff.

Amy Ratcliffe is the author of Star Wars: Women of the Galaxy, The Jedi Mind, A Kid’s Guide to Fandom, The Art of Star Wars: Galaxy’s Edge, and Star Wars: Elee & Me. She’s the managing editor for Nerdist, and an entertainment reporter published at StarWars.com, IGN, and more. She lives in Asheville with her husband and two cats.

Dr. Chris Kempshall is an historian focusing on the First World War and popular representations of warfare. He is the author of numerous academic works including The First World War in Computer Games, and British, French, and American Relations on the Western Front, 1914-1918. He currently teaches courses on history and war at the Bader International Study Centre and is a Senior Research Fellow at the Centre for Army Leadership, Royal Military Academy Sandhurst.