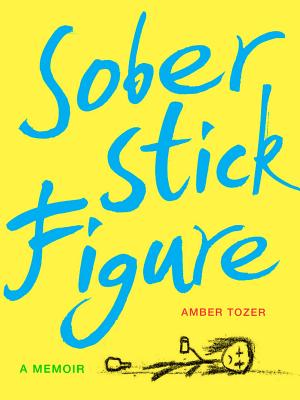 Sober Stick Figure is a memoir from stand-up comedian Amber Tozer, chronicling her life as an alcoholic and her eventual recovery -- starting with her first drink at the age of seven -- all told with the help of childlike stick figures. Amber writes and illustrates the crazy and harsh truths of being raised by alcoholics, becoming one herself, stagnating in denial for years, and finally getting sober.

As a teenager, Amber is an overachieving student athlete who copes with her family's alcoholic tragedies by focusing on her achievements. It quickly takes a funny and dark turn when she starts to experiment with booze and ignores the warning signs of alcoholism. Through blackouts, cringe-worthy embarrassments, and pounding hangovers, she convinces herself that she "just likes to party." She leaves her hometown of Pueblo, Colorado to follow her dreams, and ends up in New York City, spending lots of time binge drinking, passing out on trains, and telling jokes on stage. She then moves to Los Angeles, thinking sunshine and show business will save her. Eventually hitting rock bottom, she has a moment of clarity, and knows she has to stop drinking. It's now been seven years since that last drink, and she's ready to tell her story. Sober Stick Figure is adventurous, hilarious, sad, sweet, tragic -- and ultimately inspiring.

Amber Tozer has written for the Cartoon Network's animated sketch series MAD and Adult Swim's Moral Orel. Her tweets have been featured by Ellen, Huffington Post, Playboy, and Mandatory. She co-created #nitTWITS, a Twitter-based web series that features writers and performers from SNL, Modern Family, The Office, and Conan. She has appeared on Last Comic Standing, performs stand-up comedy across the US, and has written about sobriety for The Fix.com, After Party, and Thought Catalog. She lives in Los Angeles.