Making a Spectacle: A Fashionable History of Glasses (Hardcover) 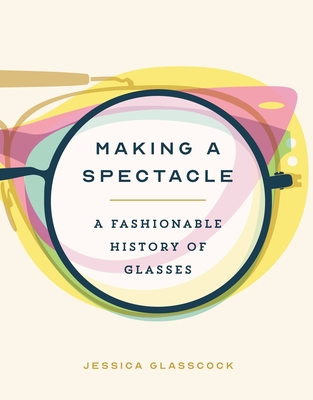 From 13th century Franciscan monks to Beyoncé in Black is King, Making a Spectacle charts the fascinating ascension of eyeglasses—from an unsightly but useful tool to fashion's must-have accessory.

The power of glasses to convey a range of vivid messages about their wearers have made them into a billion-dollar business that appeals to cool kids and rock stars, and those who want to be like them, but the fashionable history of eyeglasses is fraught with anxiety and drama. At the beginning of the 20th century, the assessment in Vogue and Harper's Bazaar was that spectacles were "invariably disfiguring." Invisibility was the best option, and glasses were only to be put on once the lights at the opera went dark.

While variations of that glasses-shaming sentiment appeared at regular intervals over the next 100 years or so, eyeglasses continued to evolve into an endless array of shapes, colors, purposes, and personalities. Once sunglasses took off in the 1930s, the magazine editorial made glasses a conspicuous part of the fashion narrative. Eyeglasses went to the ski slopes, the stables, the beach, the Havana hotel. Plastic innovations made a candy-colored rainbow of cat-eyes and "starlet" styles possible. Suddenly, everyone had the opportunity to look like Jackie O on vacation in Capri.

Making a Spectacle traces contemporary high fashion frames back to their origins: the military aviator, the glam cat eye, the nerdly Oxford, the high-tech shield, the fanciful butterfly, the lowly rimless, and other styles all make an appearance. Featuring interviews with influential designers, makers, and purveyors of glasses including Adam Selman, Kerin Rose Gold, and l.a. Eyeworks, Making a Spectacle also takes a look at today's most cutting edge eyewear, showing the reader the latest and most innovative ways to see and be seen.

Author Jessica Glasscock is currently obsessing over 1980s New York avant-garde designers and the glorious triumph of gothness in contemporary culture. This is in no way related to a youth spent alone in her bedroom applying black eyeliner and listening to The Cure. Jessica denies such a youth ever took place. What she can confirm is that she is a writer, researcher, and college instructor currently residing in the Riverdale area of the Bronx. The author of Striptease: From Gaslight to Spotlight (2003), American Fashion Accessories (2008), and Making a Spectacle (2021), she also worked as a researcher and education liaison for The Costume Institute at the Metropolitan Museum of Art for over a decade. An instructor at Parsons School of Design since 2003 and sometime consulting fashion historian for VFILES digital archive, Jessica is primarily devoted to becoming a professional bon vivant. While she loves to write and teach, she hopes to be remembered for being clever at dinner.