Full Service: My Adventures in Hollywood and the Secret Sex Lives of the Stars (Hardcover) 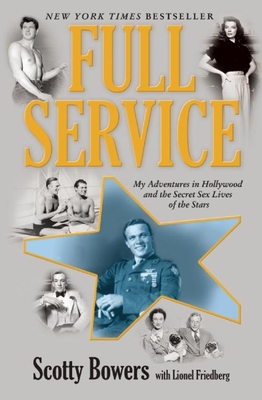 Now the subject of the hit documentary Scotty and the Secret History of Hollywood, praised by Vanity Fair as "full of revelations" and Entertainment Weekly as "deliciously salacious," Full Service is the remarkable true story of Scotty Bowers, the "gentleman hustler," during the heyday of classic Hollywood.

Newly discharged from the Marines after World War II, Bowers arrived in Hollywood in 1946. Young, charismatic, and strikingly handsome, he quickly caught the eye of many of the town's stars and starlets. He began sleeping with some himself, and connecting others with his coterie of young, attractive, and sexually free-spirited friends. His own lovers included Edith Piaf, Spencer Tracy, Vivien Leigh, Cary Grant, and the abdicated King of England Edward VIII, and he arranged tricks or otherwise crossed paths with Tennessee Williams, Charles Laughton, Vincent Price, Katharine Hepburn, Rita Hayworth, Errol Flynn, Gloria Swanson, No l Coward, Mae West, James Dean, Rock Hudson and J. Edgar Hoover, to name but a few.

Full Service is not only a fascinating chronicle of Hollywood's sexual underground, but also exposes the hypocrisy of the major studios, who used actors to propagate a myth of a conformist, sexually innocent America knowing full well that their stars' personal lives differed dramatically from this family-friendly mold. As revelation-filled as Hollywood Babylon, Full Service provides a lost chapter in the history of the sexual revolution and is a testament to a man who provided sex, support, and affection to countless people.

Scotty Bowers, now 95, still works as a bartender at private functions in Hollywood.Lionel Friedberg is an Emmy-winning producer, director and professional writer.

I have known Scotty Bowers for the better part of a century. I’m so pleased that he has finally decided to tell his story to the world. His startling memoir includes great figures like Spencer Tracy and Katherine Hepburn. Scotty doesn't liethe stars sometimes doand he knows everybody.”Gore Vidal

Mr. Bowers, 88, recalls his highly unorthodox life in a ribald memoir . . . [A] lurid, no-detail-too-excruciating account of a sexual Zelig who (if you believe him) trawled an X-rated underworld for over three decades without getting caught. . . . [A] lot of what Mr. Bowers has to say is pretty shocking. . . . Full Service at the very least highlights how sharply the rules of engagement for reporting celebrity gossip have changed. . . . [I]t’s much harder to keep details as salacious as the ones Mr. Bowers outlines under wraps.”Brooks Barnes, New York Times

"A jaw-dropping firsthand account of closeted life in Hollywood during the '40s and '50s. The wholesome image of the postwar American family was acted, written, directed, and designed by people for whom such a life was never possible and Bowers writes about their pain and brilliance with the childlike wonder of Chauncey Gardiner. Turner Classic Movies will never quite look the same."Griffin Dunne, Actor/Director

[Scotty Bowers] made his reputation by sleeping with everyone in Hollywood who wasn’t actually Lassie, and now he tells all. If you ever suspected that Spencer Tracy was bisexual and Tyrone Power a coprophiliac, and if you happen to believe everything you read, here is all the testimony you require.”Anthony Lane, The New Yorker

This handsome ex-Marine and his friendly gas station have long been alluded to in Hollywood memoirs. And now, at last, they go public.”Janet Maslin, The New York Times

The book is like a 286-page gossip column from Hollywood’s golden ageit names all the names and spills all the secrets. Bowers was a . . . free-love advocate far ahead of his time who claimed Cary Grant, Spencer Tracy, Edith Piaf and the Duke of Windsor (to mention just a few) as lovers.”W Magazine, February’s Most Wanted”

[A] tell-all book . . . .Cary Grant, Rock Hudson, George Cukor, Katharine Hepburn and Vivien Leigh are among those named by Bowers, now 88. . . . Younger readersat least those raised in the Internet and TMZ agemay find nearly as shocking the fact that the stories were squelched by studio publicists and remained largely under wraps back in the day.”Chicago Tribune

Connoisseurs of lurid tell-alls and the golden age of Hollywood will almost certainly be entranced by Full Service.”The Atlantic Wire

The Scotty I knew was a guy who always seemed to be enjoying his life working morning, noon and night, with never a gripe; always with a smile to greet you, and never with an axe to grind. After a lifetime in Hollywood, that’s a remarkable feat and its own kind of Zen.”David Patrick Columbia, New York Social Diary

"They said he'd never talk but at long last, the legendary Scotty Bowers has told his story, with all the honesty, compassion and insight that made him a confidant of movie stars, directors, billionaires, and politicians. Bowers knew Hollywood like no one else, invited behind closed doors to observe firsthand the true stories of America's dream factory. This is juicy, juicy stuffbut just as importantly, it's a seminal chapter of American popular culture that gives us a richer understanding of the people, times, and culture of Hollywood's Golden Age."William J. Mann, author of Kate: The Woman Who Was Hepburn

Delicious with every salacious detail . . . The photographs alone are worth the price of admission.”Huffington Post

Controversial . . . vivid . . . As well as a titillating catalogue of sexual intrigue, the book is designed to expose of the hypocrisy and fear that swirled beneath the industry's on-screen glamour and crafted wholesomeness. . . . [Bowers] dramatically describes the climate of fear in an era when he worked as a bartender at Hollywood parties while the LAPD vice squad were prowling the hills in their patrol cars looking for parties and opportunities to arrest the participants.”The Guardian (UK)

After five years maintaining that sex secrets of Tinseltown’s elite, at the age of 88, Bowers is revealing all in a sensational new memoir.”The Daily Express (UK)

[Bowers] became the Mr. Fixit for screen icons who sought out the more lurid trappings of Tinseltown during its glory days. Wild affairs, gay romps and rampant prostitution were the order of the day and Bowers was the man they turned to for their salacious entertainment.”The Daily Mirror (UK)

Scotty Bowersonce a beacon of discretionfinally unveils the carnal peccadillos of many of the studio era’s biggest players. . . . For impromptu beach house read-a-loud moments . . . this book is a must.”Lambda Literary

[If] you're one of those people who still owns a vintage princess phone, watches Mad Men obsessively, and yearns to go back to a simpler” time when men and women exchanged witty banter in mid-Atlantic accents instead of jumping into the sack, read Bowers’ book.”Nerve.com

[Full Service] is about to blow the door off of the Hollywood Closet. . . . Escandalo!”Seattle Gay Scene

None of us are ready for what appears to be the kickass Old Hollywood memoir of 2012: Scotty Bowers’s Full Service.”AfterElton.com