Words from the White House: Words and Phrases Coined or Popularized by America's Presidents (Hardcover) 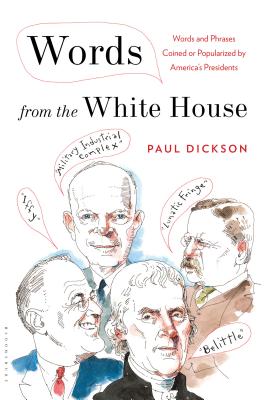 The founding fathers (a term created by Warren G. Harding for his "front porch campaign" of 1920) felt that coining words and creating new uses for old ones was part of their role in creating a new American culture and language, distinct from the proscriptive King's English. Noah Webster called the creation of such Americanisms "acts of defiance," along with such radical ideas as universal literacy and public libraries. Ever since, American presidents have enriched our vocabulary with words, phrases, and concepts that weve put to general use.

Acclaimed lexicographer Paul Dickson has compiled the first collection of new words and lexical curiosities originating on Pennsylvania Avenue. Organized chronologically, each entry contains the definition, etymology, and a brief essay placing the word or phrase in its cultural context. From Washington ("tin can") and Jefferson (who alone gets credit for some one hundred coinages, including "belittle "and the expression" holding the bag"), to Lincoln ("relocate") and Teddy Roosevelt ("bully pulpit"), to Ike ("mulligan") and Obama ("Snowmageddon"), they collectively provide an illuminating tour of more than two centuries of our history.

Paul Dickson has written some dozen word books and dictionaries, including The Dickson Baseball Dictionary, A Dictionary of the Space Age, and Slang. An occasional contributor to the late William Safire's "On Language" column in the New York Times, Dickson has coined two words of his own: "word word" (as in the question "Are we talking about an e-book or a book book?") and "demonym" (the name for a person from a specific locality, e.g., New Yorker). He lives in Garrett Park, Maryland.

"Paul Dickson is the most prolific writer I know. While I have met authors who seem to publish a new book every other week (James Patterson and Nora Roberts come to mind), Dickson’s books cover such a wide range of subjects and topics that I consider him to be that one true Vesuvius of books. He never stops writing. Dickson has written his share of dictionaries and word books. The latest, "Words From the White House," examines a plethora of words, terms and expressions that have emanated from the most exalted office in the land, the presidency of the United States. Some of these expressions are now in common usage. Others have languished and faded into obscurity. The book is written in dictionary form, in alphabetical order. Each entry has an explanation of how a word or term was used during a particular presidency. Dickson writes that "using the Oxford English Dictionary and its ‘first evidence for word’ credits Thomas Jefferson with 110 new words and 382 new senses for older words." Jefferson was adept at creating new ones. It was Jefferson who concocted the impressive word "neologize." It means: "to coin or use new words or phrases." Here are some "words from the White House" and the presidents who popularized them: George Washington gave us "administration," "average" and "hatchet man." Warren Harding came up with the term "founding fathers." Theodore Roosevelt coined many classics including "loose cannon," "frazzle," "pack rat," "lunatic fringe," "pussyfooter" and "muckraker." Presidents love a catchy phrase. When William Henry Harrison won the presidency in 1840 he employed the slogan "as Maine goes … so goes the nation." Back then the voters of Maine cast ballots in September, six weeks ahead of time, to get their votes counted before winter came. That same 1840 Harrison campaign engendered the expression "keep the ball rolling." Dickson explains that "an immense steel-ribbed ball covered in canvas and plastered with this and other slogans was pushed from town to town … ." George W. Bush was often ridiculed for his word inventions. He was mocked for using the word "analyzation" in a speech. Dickson notes that "this is a respectable word dating to 1698." In another speech he declared "this issue doesn’t resignate with the people." His use of "resignate" was derided, too. Dickson shows this obscure usage actually dated from the 16th century. Some expressions were quickly forgotten. Here are some examples: "Angloman. Bomfog. Floogie bird. Innocuous desuetude." Dickson explains them all. He closes his entertaining and informative book with a list of "the top ten words invented or promoted by presidents." George W. Bush made the list with this memorable word invention: "misunderestimate." --Vick Mickunas, Dayton Daily News "A compendious, entertaining look at our nation's leaders through words and turns of phrase."--Kirkus Reviews "….thoroughly enjoyable."—Steven Levingston, The Washington Post  “The author is an essayist and lexicographer who presents this entertaining look at how presidents have used and shaped our language.”—The Dispatch (Columbus) For the Washington Independent Review of Books' Q&A with the author, please visit:http://www.washingtonindependentreviewofbooks.com/author-q-and-a/author-qa-with-paul-dickson/