The Diaries of Franz Kafka (The Schocken Kafka Library) (Hardcover) 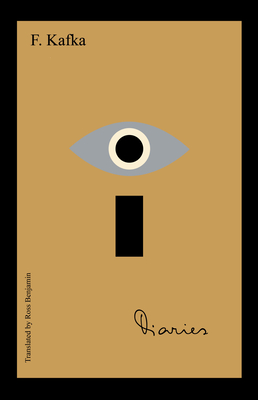 An essential new translation of the author’s complete, uncensored diaries—a revelation of the idiosyncrasies and rough edges of one of the twentieth century’s most influential writers.

Dating from 1909 to 1923, the handwritten diaries contain various kinds of writing: accounts of daily events, reflections, observations, literary sketches, drafts of letters, accounts of dreams, as well as finished stories. This volume makes available for the first time in English a comprehensive reconstruction of the diary entries and provides substantial new content, including details, names, literary works, and passages of a sexual nature that were omitted from previous publications. By faithfully reproducing the diaries’ distinctive—and often surprisingly unpolished—writing in Kafka’s notebooks, translator Ross Benjamin brings to light not only the author’s use of the diaries for literary experimentation and private self-expression, but also their value as a work of art in themselves.

FRANZ KAFKA was born in 1883 in Prague, where he lived most of his life. During his lifetime, he published only a few short stories, including “The Metamorphosis,” “The Judgment,” and “The Stoker.” He died in 1924, before completing any of his full-length novels. At the end of his life, Kafka asked his lifelong friend and literary executor Max Brod to burn all his unpublished work. Brod overrode those wishes.

“Essential . . . The new volume, in a sensitive and briskly idiomatic translation by Ross Benjamin, offers revelation upon revelation. It’s an invaluable addition to Kafka’s oeuvre."
—The New York Times

“Momentous . . . Life also bursts into literature at the level of form, and in Kafka’s diaries even the words are acrobatic. As Ross Benjamin notes in the thoughtful introduction to his new translation, his aim is to capture the extent to which the diaries were a 'laboratory for Kafka’s literary production' and thereby catch the author 'in the act of writing.' He has succeeded. Everything in the diaries thrashes . . . [They] are the intimate incisions of an author who could write only by etching words into the flesh.”
—The New Yorker

“Readers will welcome this new edition of the Diaries, complete, uncensored, in a fluent translation by Ross Benjamin, and supplemented with 78 pages of invaluable notes, the fruit of half a century of Kafka scholarship.”
—J. M. Coetzee, author of Disgrace

“Max Brod, Franz Kafka’s intimate friend and fellow writer, was, it is now understood, both his savior and his betrayer. Without his rescue of Kafka’s at-risk papers, there would be almost no Kafka at all; but in the presence of Brod’s mediating intrusions as editor, have we ever really known Kafka’s authentic voice? This new and scrupulously faithful translation of the Diaries brings us, unembellished by theory, the true inner life of the twentieth century’s most complex and enigmatic literary prophet, whose very name has come to us as symbol and vision of innocent vulnerability in the face of irrational force. Yet warns: beware interpretation!”
—Cynthia Ozick, author of Antiquities

“Franz Kafka’s inner life has always been a bit of a mystery. The expurgated diaries in their original German and English versions hinted at his complicated, often confused relationship to sex, politics, illness, and being Jewish. This readable new translation of the complete German version of the diary transforms the silent Kafka of a century ago into a Kafka not only of his times but of ours.”
—Sander Gilman, author of Franz Kafka, The Jewish Patient

“Thirty two years after their original publication in German, Franz Kafka's complete Diaries are here in Ross Benjamin's outstanding translation. A boon for the American reader! The previous edition of the Diaries was egregiously censored by Max Brod who eliminated whatever, in his misdirected view, could detract from the saintly image of his friend which he chiseled for posterity. Now we have in English some of the most intimate reflections and literary experiments of one of the towering geniuses of modern literature.”
—Saul Friedländer, author of Franz Kafka: The Poet of Shame and Guilt

“A fresh, unadulterated translation of Kafka’s notebooks, dense with introspection and writerly despair . . . The attraction of Kafka’s diaries has always been his coruscating descriptions of his existential struggles as a writer and human being. He captures his frustration in ways that are wrenching, vivid, and highly quotable . . . Essential reading.”
—Kirkus Reviews

“Finally! Three decades after the publication of the critical edition of Franz Kafka's diaries in Germany, English readers can now 'catch Kafka in the act of writing,' thanks to this monumental endeavor by translator Ross Benjamin. This new volume offers us Kafka's singular perspective and delivers an expanded window into Kafka's unique personality. The intricately researched and detailed Notes (75 pages of them!) provide us with a wealth of knowledge and context. For those of us in thrall to Kafka the Man as well as the Writer, the Notes add layers of life to Kafka's world and milieu and reveal a new depth and richness to Kafka's humanity. This new volume is an essential addition to the library of every serious student and reader of Kafka.”
—Kathi Diamant, author of Kafka's Last Love and director of the Kafka Project

“‘A book must be the axe for the frozen sea within us,” Kafka famously wrote. In his Diaries, we see him turning that axe on his own psyche, recording his dreams, jotting snatches of overheard dialogue, even drafting stories. For the first time, Ross Benjamin’s new translation gives English readers access to the entirety of the Diaries, with Kafka’s fragmentary structure and idiosyncratic grammar preserved. The result is the most intimate glimpse possible into the process of this singular writer.”
—Ruth Franklin

“Ross Benjamin has given the literary world an incredible treasure in this thoughtful edition. Kafka has never been so fully present, both as a man and a writer."
—New York Journal of Books