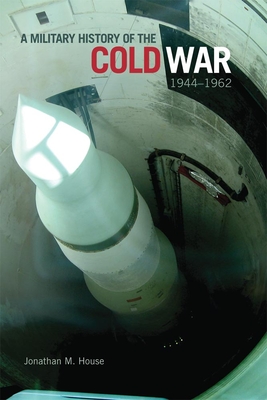 This is book number 34 in the Campaigns and Commanders series.

The Cold War did not culminate in World War III as so many in the 1950s and 1960s feared, yet it spawned a host of military engagements that affected millions of lives. This book is the first comprehensive, multinational overview of military affairs during the early Cold War, beginning with conflicts during World War II in Warsaw, Athens, and Saigon and ending with the Cuban Missile Crisis.
A major theme of this account is the relationship between government policy and military preparedness and strategy. Author Jonathan M. House tells of generals engaging in policy confrontations with their governments' political leaders--among them Anthony Eden, Nikita Khrushchev, and John F. Kennedy--many of whom made military decisions that hamstrung their own political goals. In the pressure-cooker atmosphere of atomic preparedness, politicians as well as soldiers seemed instinctively to prefer military solutions to political problems. And national security policies had military implications that took on a life of their own. The invasion of South Korea convinced European policy makers that effective deterrence and containment required building up and maintaining credible forces. Desire to strengthen the North Atlantic alliance militarily accelerated the rearmament of West Germany and the drive for its sovereignty.
In addition to examining the major confrontations, nuclear and conventional, between Washington, Moscow, and Beijing--including the crises over Berlin and Formosa--House traces often overlooked military operations against the insurgencies of the era, such as French efforts in Indochina and Algeria and British struggles in Malaya, Kenya, Cyprus, and Aden. Now, more than fifty years after the events House describes, understanding the origins and trajectory of the Cold War is as important as ever. By the late 1950s, the United States had sent forces to Vietnam and the Middle East, setting the stage for future conflicts in both regions. House's account of the complex relationship between diplomacy and military action directly relates to the insurgencies, counterinsurgencies, and confrontations that now occupy our attention across the globe.