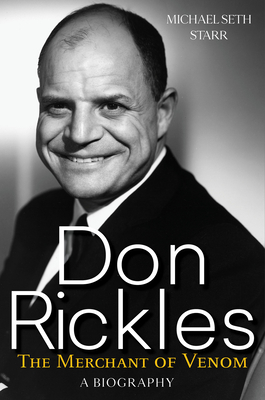 Riding a wave of success that lasted more than sixty years, Don Rickles is best known as the “insult” comic who skewered presidents, royalty, celebrities, and friends and fans alike. But there was more to “Mr. Warmth” than a devilish ear-to-ear grin and lightning-fast put-downs. Rickles was a loving husband, an adoring father who suffered a devastating loss, and a loyal friend to the likes of Bob Newhart and Frank Sinatra. Don was also a young student at the American Academy of Dramatic Arts with future stars Jason Robards, Jr., Don Murray, and Grace Kelly, and intended to become a seriously committed actor. But it was in small nightclubs where Rickles found success, steamrolling hecklers, honing his acerbic put-downs, and teaching the world to love being insulted. Sex, race, religion, nationality, physical appearance, political leanings—nothing and no one was safe from the “Planned Parenthood Poster Boy,” as Johnny Carson referred to him.

The Merchant of Venom traces Don Rickles’ career from his rise in the 1950s to a late-in-life resurgence thanks to the Toy Story franchise, his role in Martin Scorsese’s Casino, and scores of TV appearances from Carson to Seth Meyers. In the intervening decades, Rickles conquered every medium he worked in, including film, television, and on stage, where the Vegas legend was still performing at the age of eighty-five. In his highly memorable career, he was idolized by a generation of younger comedians including Jerry Seinfeld, Chris Rock, and Jay Leno, and performed in the shadow of a shocking open secret: he was the nicest man in town.

An in-depth portrait of the personal and singular professional life of Don Rickles, The Merchant of Venom delivers a hilarious, moving, and long-overdue look at the real man behind the sting.

Michael Seth Starr has covered television at The New York Post as a reporter, critic, columnist, and editor since 1995. He has written critically acclaimed biographies of Art Carney, Joey Bishop, Bobby Darin, Raymond Burr, Redd Foxx, Ringo Starr, and William Shatner, as well as a filmography of Peter Sellers. Starr has appeared frequently on national television on many shows including The Today Show, Good Morning America, CBS This Morning, The Early Show, Rachael Ray, The Talk, and Entertainment Tonight. He lives in New Jersey and can be found online at michaelsethstarr.com.

“Insightful and funny…. A fun biography that should appeal to Don Rickles fans and those interested in the history of stand-up comedy.” —Library Journal

“​In 1966, a Canadian actor named William Shatner was cast as Captain Kirk on a low-budget TV series set to premiere on NBC. And the rest is history: As Shatner approaches his 90th birthday, Starr takes a comprehensive look at the legendary performer.” —The New York Post on Shatner

“Starr successfully paints a complete portrait of the legendary drummer, whose contributions to rock 'n' roll, he argues, have largely been overshadowed by his iconic bandmates. With aplomb, Starr creates an intimate picture of Liverpool and Hamburg during the 1950s and '60s that puts the rest of Ringo's life (including his later battles with alcoholism and drug addiction) into fascinating perspective…revealing the nuanced and passionate man who was the backbone of the Beatles.” —Publishers Weekly on Ringo: With a Little Help

“Clearly the definitive biography of one of the most famous musicians - or,  heck, people - of the last century.” —The Houston Chronicle on Ringo: With a Little Help

“Until Ringo pens his memoirs (if he ever does), this biography will serve as the most complete and up-to-date telling of his life story.” —Library Journal on Ringo: With a Little Help

“A clear and well-written portrait of a superb performer and a wonderful human being, with emphasis on the word ‘human.’” —The New York Times Book Review on Art Carney: A Biography

​”TV's beloved ``Ed Norton'' finally gets his due in a breezy, often incisive biography…Carney is fortunate to have found his biographer in Starr, TV columnist for the New York Post. This is a brief book by current standards but so densely packed with information that it's hard to imagine what might have been missed…Starr appears to have talked to virtually everyone who ever knew or worked with Carney (though not Carney himself), and he wisely lets these friends and acquaintances tell their own stories. He keeps his own voice clear but refreshingly impartial. Art Carney emerges from these pages as a kind, gentle man who, tragically, has seldom found the love for himself that his millions of fans give him without qualification. Starr's perceptive biography presents its subject as a man who became legendary, not through hype or self-promotion, but through the sheer force of his talent.” —Kirkus Reviews on Art Carney: A Biography

The thing about a biography of a celebrity who's slipped under the radar (comedian and TV star Foxx died in 1991) is that, if you do it right, you can, in effect, bring back to life a fascinating character. Starr, who's also written bios of Art Carney and Raymond Burr, does it right…An excellent biography, respectful and compassionate about its subject and revealing and perceptive about American popular culture.” —Booklist, STARRED REVIEW on Black and Blue: The Redd Foxx Story

“Starr reconstructs Foxx's life in a raw, honest manner, interspersing fascinating historical facts along the way. This well-presented biography will be especially valuable to those who were not around when Foxx was at the top of his game. Recommended for anyone interested in TV and African American history.” —Library Journal on Black and Blue: The Redd Foxx Story

“A quick and fluid read, Starr's book succeeds at bringing Darin the human being to life.” —Library Journal on Bobby Darin: A Life