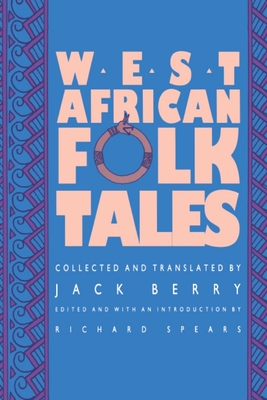 These 123 tales reflect the rich oral tradition of West African folklore. Playful and sly, they teem with talking animals and shape-shifting tricksters, with pacts and promises made and broken, and with impossible deeds done through chicanery and magic. These tales deal with themes common throughout West Africa and the world. Indeed, American readers will recognize such characters as Brer Rabbit and the "tar baby," which had their roots in the folklore of this region. Because there is no overlay of Western values, however, some of the morals may surprise the unsuspecting reader—murder and polygamy, cannibalism and cunning, witchcraft and revenge spin matter-of-factly throughout the stories.

"While Spears and Berry have admirably avoided Americanizing these tales, many appear to prefigure our own Uncle Remus tales and several—about loquacious newborns—even seem distant precursors to supermaket tabloid tales of the strange but 'true.' Taken together, these West African folktales demonstrate with vast charm how a culture's storytelling both preserves it and transcends it." —Publishers Weekly