Rebel on Pointe: A Memoir of Ballet & Broadway (Hardcover) 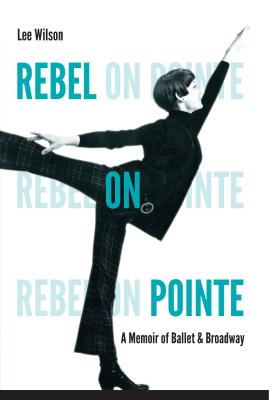 "Touching and beautiful; Lee Wilson is an inspiration to us all for finding a passion in life and moving beyond familial pressures and societal norms."--Zippora Karz, former soloist, New York City Ballet "The culture of the ballet world is divulged in all its glorious detail. Wilson's compelling account of her training and career shows the true courage and persistence this profession requires."--Ali Duffy, founder and choreographer, Flatlands Dance Theatre "Lee brings to her writing the same keen intelligence she brought to her dancing. It is a joy to relive some of the important moments of ballet history with her and to empathize as she uses her dance career to gain the independence and freedom she perceived as lacking for women like her mother only one generation earlier."--Maina Gielgud, former director, The Australian Ballet
In this uplifting memoir, Lee Wilson describes how she grand jeted from the stifling suburbia of the 1950s, a world of rigid gender roles, to the only domain where women and men were equally paid and equally respected--in grand, historic dance theaters and under the bright lights of the Broadway stage. Short, plump, pigeon-toed, and never good enough for mom, Lee Wilson dared to dream she could grow up to be a star. In 1962, fresh out of high school and a mere sixteen years old, Wilson left her country and the comforts of home to make the five-day journey across the Atlantic. She saw Europe as an attractive alternative to New York, where great American ballet companies were struggling to survive. That same year, Wilson made her professional debut in Monte Carlo in a command performance for Prince Rainier and Princess Grace. The following summer, as she danced across Europe, she thrilled to the sound of her first bravos--and never looked back. After touring Europe and dancing with the Metropolitan Opera Ballet in New York, Wilson set her sights on Broadway, where she danced in many famous shows including Hello Dolly She was in the original national company of A Chorus Line and played Patty in the original Broadway production of You're a Good Man, Charlie Brown. Rebel on Pointe immerses the reader in a remarkable and visionary world. It lifts the veil of myth surrounding legendary dance icons like George Balanchine, Rosella Hightower, Erik Bruhn, and Rudolf Nureyev to reveal the real men and women who have influenced and embodied the world of dance. Wilson expertly depicts how her profession--at times considered so rigid and exacting--was a leading force in the liberation of women from the prison of patriarchal post-war society. The hard-won gains and the maddening setbacks of the gender revolution are seen here through the eyes of a young dancer searching for freedom, one "pas" at a time.

Lee Wilson danced for royalty in Europe, gun-toting revolutionaries in Algeria, American aristocrats at the Metropolitan Opera, and a galaxy of stars on Broadway. She is an award-winning writer, producer, and actor living in Los Angeles.