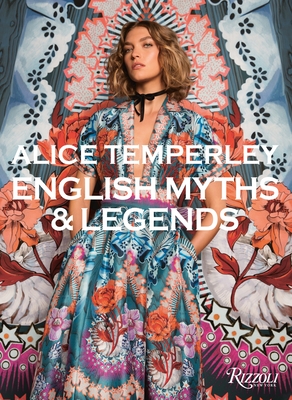 Alice Temperley, one of the most accomplished British designers working today, creates clothing that is coveted by the likes of Kate Hudson, Sarah Jessica Parker, Olga Kurylenko, Rita Ora, Poppy Delevingne, Helen Mirren, Adele, Naomie Harris, and The Duchess of Cambridge. This book is conceived as a celebration of Alice Temperley's aesthetic and conveys the effortless decadence and handcrafted allure of her brand. This book highlights the key moments that have inspired the last decade of work—focusing on the personal moments that have shaped her brand.

Filled with captivating photographs from Temperley London photo shoots and fashion editorials, ALICE TEMPERLEY: ENGLISH MYTHS AND LEGENDS  gives an in-depth look into the inspirations and processes behind the creation of the collections. While her first Rizzoli book, TRUE BRITISH (2011), was a chronological story about the first 10 years of the brand, ENGLISH MYTHS AND LEGENDS gives a more intimate view of what defines Temperley London today and its evolution; revealing both practical and sentimental moments of the designer’s generative history.

Alice Temperley is a British fashion designer based in London. Her eponymous fashion label Temperley London was launched in 2000, with her bridal line launching in 2006. In the 2011 New Year Honours, Temperley was appointed Member of the Order of the British Empire (MBE) by Her Majesty the Queen at Buckingham Palace for services to the fashion industry. Alice lives between West London and Somerset with her son Fox.

"For her, it all boils down to lifestyle. Her second Rizzoli tome, English Myths and Legends, released earlier this fall, not only showcases her sketches and elaborate fashion show sets, but her Somerset home, too—robin egg blue paint, disco balls, Union Jack flags, vintage fabrics and all."
—Vogue.com

"British designer Alice Temperley is further documenting her creative journey with a second book, “Alice Temperley: English Myths and Legends.” Written by Temperley and published by Rizzoli, the 336-page tome focuses on the designer’s inspirations and methods, and includes more than 250 photographs."
—Women's Wear Daily

"What to Read This Month"
—Vanity Fair

"For anyone who loves fashion and romance and escapism, this book will transport you to Alice Temperley's world and may make you buy a dress or two from her, if you haven't already."
—Forbes.com

"The new book Alice Temperley: English Myths and Legends, out October 3 from Rizzoli, celebrates the world of Temperley London, offering an extensive photographic look into the inspirations behind its designs. The tome is filled with photos from fashion shoots and editorials."
—New York Magazine, The Cut

"Visually, the book is quite beautiful and apparently is made up of mood boards, sketches, and stills from various collections of the last six years."
—New York Journal of Books