Made in Mexico: The Cookbook: Classic And Contemporary Recipes From Mexico City (Hardcover) 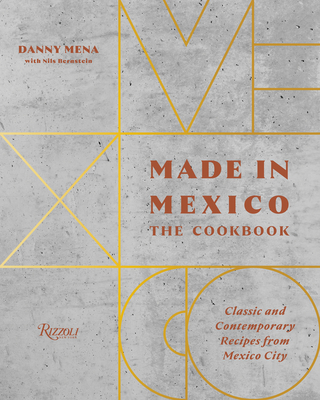 By Danny Mena, Nils Bernstein (Contributions by)
$40.00
On Our Shelves Now

Inspired by the best restaurants, fondas, loncherías, and taco stands in Mexico City and adapted for the home cook, Made in Mexico is a delicious blend of classic regional and contemporary Mexican cuisine from celebrated chef Danny Mena's hometown.

Made in Mexico mixes recipes inspired by Mexico City street food, local eateries, and multi-starred restaurants, combining regional traditions and global trends. In more than one hundred dishes for breakfast, antojitos or snacks, salads and ceviches, main dishes, and desserts, as well as staples such as salsa roja and tortillas, chef Danny Mena shows American home cooks the depth and diversity of true Mexican cooking in the capital city, with explanations for proper technique and suggestions for ingredient variations.

Transportive photography from the streets, squares, markets, fondas, and restaurants of Mexico City complements beautifully plated dishes and an alfresco backyard dinner. Each recipe is inspired by a different Mexico City restaurant, giving the book a second life as a delicious image-filled guide to one of the world's hottest culinary destinations. Fascinating sidebars illuminate aspects of Mexican food culture and feature notable locations.

Mexico City-born Danny Mena began at New York landmarks Blue Hill and The Modern before opening Hecho en Dumbo in 2010. In 2017, Mena launched La Lonchería in Brooklyn's Bushwick neighborhood.
Nils Bernstein is a food, drink, and travel journalist and recipe developer based in Mexico City and New York. He is food editor for Wine Enthusiast magazine and a contributor to Bon Appétit, Epicurious, GQ, and Men's Journal.

"Made in Mexico: The Cookbook is such an exciting book! Danny Mena first takes readers to a whole host of Mexico City's most mouth-watering, iconic spots (yes, use it as the guide for your next trip), then shares recipes for his versions of their specialties—versions perfected during his many years as chef of New York's Hecho en Dumbo and other acclaimed spots. I love how deeply rooted this book is in real Mexico City, how it makes me want to get on a plane—or go into the kitchen and get busy—so that I can experience once again those electric flavors unique to my favorite city in the world."
—Rick Bayless, James Beard Award-winning author, host of Mexico—One Plate at at Time, and chef of Chicago's Frontera Grill and other restaurants

"Chef Mena's guide to Mexico City's dining and coking scene is an exhilarating journey into the authenticity of Mexico's best recipes and restaurants. As a Mexico City native, I admire and respect Chef Mena's honesty and passion for real Mexican cuisine. Readers can look forward to an in-depth culinary adventure into how locals eat and drink in Mexico City—and the best places to visit! ¡Salud y buen provecho!"
—Richard Sandoval, chef, founder, and CEO of Richard Sandoval Hospitality

"MADE IN MEXICO: THE COOKBOOK, Classic and Contemporary Recipes from Mexico City, Rizzoli, by Danny Mena and Nils Bernstein is a delicious love letter to Mexico City’s exuberant dining scene, a treasure trove of recipes and restaurants, an in-depth culinary adventure into the authentic fondas, loncherias, taco stands and world class fine dining establishments that makes this vibrant capital such an exciting food destination. Dazzling photography by Aaron Adler and Brent Herrig burst with creativity and innovation just like this regional cuisine." —ENTREE TRAVEL NEWSLETTER

"Danny Mena of New York's (now closed) Hecho En Dumbo and La Loncheria gives us Made In Mexico: part cookbook, part travel guide. Mena visits his favorite restaurants around Mexico City and then recreates their specialties with his own twist. Many recipes use less than five ingredients, and even more build on others in the book—which means preparing a Mexican feast for a crowd is a no brainer." —EPICURIOUS.COM

"This is not your typical Mexican cookbook full of tacos and tamales. It bursts at the seams with a plethora of traditional and contemporary Mexican recipes derived from the heart of Mexico, in the country's capital. Recipe introductions refer to the actual Mexico City restaurants from which they originate." —MISSION: FOOD.COM

"This is a great way to see Mexican food through the eyes of someone excited to show the best his hometown has to offer. Even in seemingly familiar categories such as tacos, Mena advocates for versions that don’t commonly turn up elsewhere, such as a charcoal-grilled short rib taco."
—KITCHEN ARTS AND LETTERS