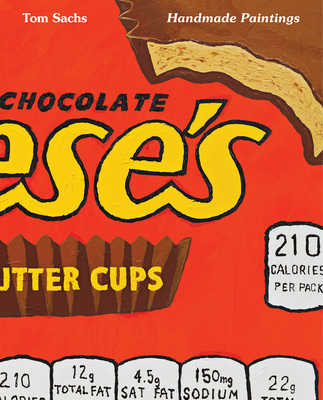 The most recent body of paintings of this New York-based artist, featuring the artist's examination of consumer culture in his handmade, "do-it- yourself " aesthetic.

This is the first publication to focus exclusively on the roughly hewn paintings by Tom Sachs (b. 1966), tracing his interest in combining cultural icons and corporate logos with a handcrafted aesthetic. Mining the American landscape for iconography, Sachs investigates themes of corporate and cultural identity--such as consumerism, branding, cultural dominance, and technological development--to explore the achievements, failures, and inherent contradictions of contemporary society. In addition to the essay by David Rimanelli and twenty-two plates, there is a conversation with the artist and an extensive chronology.

Sachs's meticulously handcrafted paintings depict such diverse topics as the Reese's candy bar, Fanta logo, Family Guy, Air Force One, Krusty O's cereal box, and the American flag; all modern icons that document successes and failures of the American experience and the ambiguities and contradictions inherent in its society and culture.

David Rimanelli began writing about art in 1988 and has chronicled developments in the New York art world for over two decades. From 1993 to 1999, he was a regular contributor to The New Yorker; since 1997 he has been a contributing editor at Artforum, writing also for Bookforum, Interview, Texte zur Kunst, Vogue Paris, frieze, The New York Times, and Flash Art. He wrote some of the first articles on artists who are now influential figures, ranging from Cindy Sherman, Mike Kelley, Thomas Ruff, and Matthew Barney to Carol Bove and Nate Lowman. He is author of many books including books on Elizabeth Peyton, Brice Marden, and Ryan McGinley: Way Far (Rizzoli, 2015).

Naomi Fry became a staff writer at The New Yorker in 2018. Her writing on popular culture, books, and art has appeared in the Times Book Review, the Times Magazine, Artforum, and n+1, among other publications. She attended Tel Aviv University, holds a master's degree in English from Johns Hopkins University, and has taught at New York University and the Rhode Island School of Design. She grew up in Israel, and now lives in Brooklyn.

"The New York artist’s first career retrospective traces his long engagement with American consumerism and popular iconography, as reflected in his paintings of everything from the flag to 'Family Guy.'" — NYT