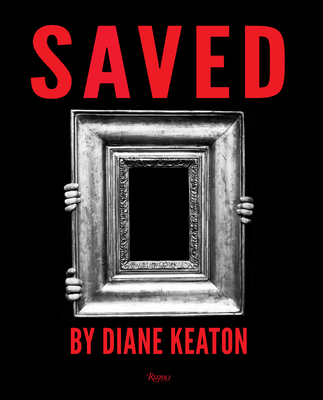 Diane Keaton’s cabinet of saved and found photographic curiosities is a visual autobiography of sorts and scrapbook of her fascinations and reflections.

A visual autobiography of a kind as only Diane Keaton could tell it, via the celebrated star’s idiosyncratic and personal collections and ruminative texts, Savedoffers an unprecedented glimpse into the mind of the legendary film star. The book begins with an homage to movies—curiously, to old “b” grade horror flicks, such as Attack of the Puppet People—a passion that manifests in a collection of rare film stills showing large-brain aliens with crablike hands and terrified men with eyes growing from their shoulders. In a second chapter or collection, the reader encoun-ters “Cracked,” a startling selection of crinkled and neglected negatives: found portraits that speak of the past through the broken lens of time. Even more intimately revealing are photographs taken by the star herself, be they of pigeons while on downtime from the set of Reds in London or of the “greeters” of Hollywood Boulevard, caught at the other end of her Rolleiflex camera lens, now revealed as the seen, the experienced, the remembered, the cherished. But this is only the beginning, the surface of a very deep dive into the wellsprings of one of the great creative talents at work today. The book is an invitation to dive in.

Diane Keaton is an Oscar-winning actress, director, and author whose books with Rizzoli include California Romantica, House, and The House That Pinterest Built.

"The actress Diane Keaton has taken her own saved and found photographs and culled them to create a visual autobiography of sorts. Along with her personal collections, photographs she snapped, and musings, Saved is an homage to movies—as only Keaton can tell it." —W MAGAZINE