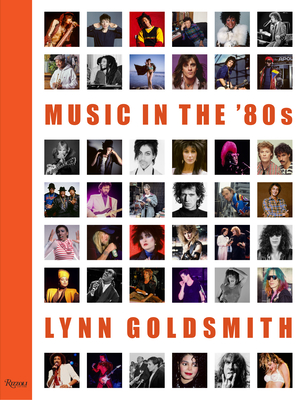 Chances are you’ve seen numerous iconic pictures by award-winning portrait and documentary photographer Lynn Goldsmith at some point in your life. Her images have graced the covers of magazines worldwide from Life to Sports Illustrated, Newsweek, Rolling Stone, People and many more. She has also published 14 monographs of her photographs, including the New York Times best-selling photobook New Kids (Rizzoli, 1990).

Over the past 50 years, Goldsmith has photographed hundreds of musicians in studio portrait sessions, at live concerts, on the road and at home.  Her new book, Music in the ‘80s, showcases an incredible range of artists during a decade when many new forms of music were gaining popularity: New Wave, Electronica, Rap, Metal, and Ska had chart topping success, as did R&B and Pop. Michael Jackson, Philip Glass, Run DMC, Miles Davis, Judas Priest - these are but a few of the names that during this period became icons. The 80’s was a time like no other in history, and the photographs chosen for this book are as diverse in their style as the music and dress of the decade.

The book also features quotes from many of the people featured in Goldsmiths’ photographs—including Iggy Pop, Tina Turner, Keith Richards, Alice Cooper, Elvis Costello and more—as well as those who were influenced by the tremendous cultural importance of the decade, proving that Music in the ‘80s is sure to hit the right note for all lovers of music.

Lynn Goldsmith is a celebrity portrait photographer, as well as a fine art photographer and painter. In the past she has been an entrepreneur, film director, recording artist, and lyricist.

"[Lynn Goldsmith's] latest book, Music in the ‘80s, dives into over 150 beloved rockstars of the 1980s—with recognizable figures like Bob Marley, David Bowie, Elton John, Grace Jones, and more harmoniously appearing in the melodic compilation. The book boasts yellow-hued, stoic portraiture throughout while louder-than-life images—both serious and vulnerable—make their mark in noir, too...Continuing to march to the beat of her own drum, Music in the ‘80s is Goldsmith’s evocative love letter to a most beloved decade." —V MAGAZINE

"Photographer Lynn Goldsmith’s Music In The ‘80s (released in September) is not just another coffee table collection of rock ‘n roll photography. Flip through a few pages and you’ll find, among the 250 vivid captures of the Grammy-winning crowd, something more complex—the work of a thoroughly versatile portraitist and documentarian.The operative word here is “versatile.” Goldsmith’s  imagery resolutely defies pigeonholing.  Once asked to characterize her “style” Goldsmith replied, “I don’t have a style…to me, the camera is a tool. It helps me to manifest my ideas…” Her  latest monograph showcases that creative independence. And she couldn’t have chosen a better era in which to do it than the “genre-bending” epoch of the ’80s." —RANGEFINDER

“Music in the ’80s” (Rizzoli) showcases the dazzling breadth of the Me Decade: The Rolling Stones to The Boss; Herbie Hancock to Run DMC; Madonna to Goldsmith’s old college pal Iggy Pop; The Pretenders to, yes, Barry Manilow." —NEW YORK POST

"From new wave to heavy metal, Iggy Pop to Elvis Costello, music in the '80s was enormously influential. Drawing from Lynn Goldsmith's 50-year tenure as an award-winning photographer of concerts, studio portrait sessions and musicians, this book will appeal to anyone who lived through (or simply loves) the decade." —HUDSON VALLEY MAGAZINE