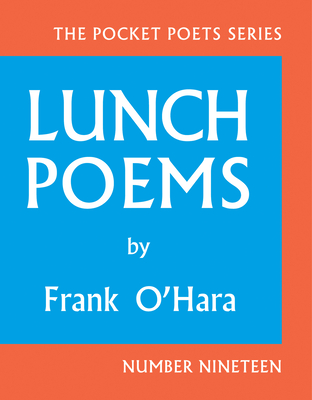 Exquisite hardcover gift edition of the groundbreaking poetry collection by the leader of the New York School of poetry, Frank O'Hara. Published on the 50th anniversary of Lunch Poems.

Lunch Poems, first published in 1964 by City Lights Books as number nineteen in the Pocket Poets series, is widely considered to be Frank O'Hara's freshest and most accomplished collection of poetry. Edited by the poet in collaboration with Lawrence Ferlinghetti and Donald Allen, who had published O'Hara's poems in his monumental The New American Poetry in 1960, it contains some of the poet's best known works including The Day Lady Died, Ave Maria, and Poem Lana Turner has collapsed ]. These are the compelling and formally inventive poems--casually composed, for example, in his office at The Museum of Modern Art, in the street at lunchtime or on the Staten Island Ferry en route to a poetry reading--that made O'Hara a dynamic leader of the New York School of poets.

This new limited 50th anniversary edition contains a preface by John Ashbery and an editor's note by City Lights publisher Lawrence Ferlinghetti, along with facsimile reproductions of a selection of previously unpublished correspondence between Ferlinghetti and O'Hara that shed new light on the preparation of Lunch.

I hope that everyone will delight in the new edition of Frank's LUNCH POEMS. The correspondence between Lawrence and Frank is great. Frank was just 33 when he wrote to Lawrence in 1959 and 38 when LUNCH POEMS was published The fact that City Lights kept Frank's LUNCH POEMS in print all these years has been extraordinary, wonderful and a constant comfort. Hurray for independent publishers and independent bookstores. Many thanks always to Lawrence Ferlinghetti and everyone at City Lights. --Maureen O'Hara, sister of Frank O'Hara

O'Hara speaks directly across the decades to our hopes and fears and especially our delights; his lines are as intimate as a telephone call. Few books of his era show less age.--Dwight Garner, New York Times

As collections go, none brings . . . quality to the fore more than the thirty-seven Lunch Poems, published in 1964 by City Lights.--Nicole Rudick, The Paris Review

What O'Hara is getting at is a sense of the evanescence, and the power, of great art, that inextricable contradiction -- that what makes it moving and transcendent is precisely our knowledge that it will pass away. This is the ethos at the center of Lunch Poems: not the informal or the conversational for their own sake but rather in the service of something more intentional, more connective, more engaged. --David L. Ulin, Los Angeles TImes

Among the most significant post-war American poets, Frank O'Hara grew up in Grafton, MA, graduating from Harvard in 1950. After earning an MA at Michigan in 1951, O'Hara moved to New York, where he began working for the Museum of Modern Art and writing for Art News. By 1960, he was named Assistant Curator of Painting and Sculpture Exhibitions at MOMA. Along with John Ashbery, Kenneth Koch, James Schuyler and Barbara Guest, he is considered an original member of the New York School. Though he died in a tragic accident in 1966, recent references to O'Hara on TV shows like Mad Men or Thurston Moore's new single evidence our culture's continuing fascination with this innovative poet.