The Red Tabs: South Africans at war in East Africa and the Western Desert 1940-1942 (Paperback) 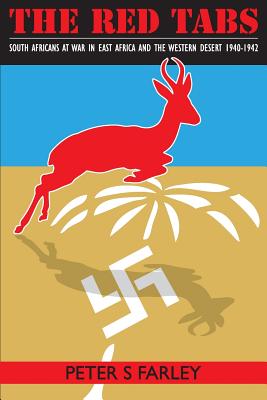 By Peter Stuart Farley
$13.00
Usually arrives at our store within 4-7 days

During WW2 a quarter of a million South Africans joined the Allied cause, to fight against the armies of Mussolini and Hitler. Pieces of red coloured material known as the 'Red Tabs' and worn on the epaulettes of their uniforms, denoted that each one was a volunteer. They pushed the Italian forces out of East Africa and then faced Hitler's Afrika Korps in the Western Desert. During a little known battle, at a stretch of desert called Acroma Keep, South African troops held their ground against overwhelming odds. Amidst the action a truce was held between the Germans and the South Africans. It lasted long enough to gather the wounded and the dead. Thereafter, the fighting recommenced. Acroma Keep became the last defensive position to fall, before Rommel's forces attacked Tobruk. Ultimately at Tobruk the German army took 33,000 prisoners. This book describes many of the battles using personal anecdotes from veteran South African soldiers and is illustrated with dozens of previously unpublished photographs and several informative maps. Presented in a systematic and simplistic format the book would make a vauable asset for the student of the Desert War.