Recipes for Conversation: A Guide to Hosting Authentic Conversations in the Digital Age (and a Pandemic) (Hardcover) 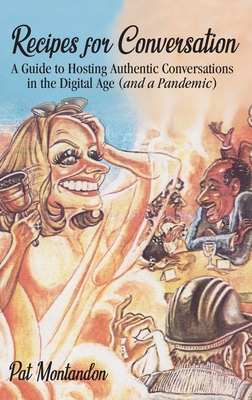 Recipes champions a return to meaningful and inspiring conversation. In the digital age, people talk but they seldom listen. This means we mostly talk AT each other rather than WITH each other, face to face. Recipes for Conversation advocates creating intimate gatherings that start with a topic of conversation, but quickly become something much more satisfying in a world that seems to be growing ever more distant and uncaring. Recipes reveals how to seek out people whom you admire or are curious about, from celebrities to those next door, and to feel comfortable hosting them in your home. It provides practical advice about how to approach potential guests and create a group that will spark lively, enriching, and astonishing conversation. Included are transcripts and photographs from Roundtables, providing a fascinating snapshot of various guests as well as a window into past eras of America's history. Pat Montandon is the author of five books, six plays, and numerous poems. Oh the Hell of It All (Harper Collins), was published in April 2008. Dubbed San Francisco's "Golden Girl" by columnists and named one of the top hostesses in the United States, Pat launched a winning career in radio and television. She is the founder of an international peace foundation and has received the United Nations Peace Messenger Award and has been nominated for a Nobel Peace Prize.