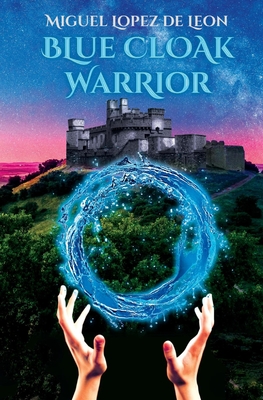 Caspian Wells, a district leader, and the strongest water elemental in his domain, has just been nominated to join The Five—a council of the most powerful rulers that govern the land of Merr. Before he can claim his seat on the ruling council, Caspian must first conquer a series of quests in four different realms.

Will he succeed and rule Merr? Or will he lose everything trying to reach a position he never had any hope of attaining?

From the award-winning author who brought you the Galadria trilogy, Carry the Knight, The Unicorn, The Covens of Elmeeria, The Light Dweller, Babble Magic, and It Took Billy comes a new young-adult fantasy that explores the nature of leadership and the risks people take to reach the top.

Caspian spent his entire life trying to be good.
Now he might have to give up everything to be great.

Miguel Lopez de Leon is a novelist who lives in Los Angeles. He writes young-adult, middle-grade, and dark fantasy novels. Miguel's novels include Blue Cloak Warrior, It Took Billy, Babble Magic, The Light Dweller, The Covens of Elmeeria, The Unicorn, Carry the Knight, and the Galadria fantasy trilogy. His debut novel Galadria: Peter Huddleston & The Rites of Passage was chosen by Kirkus Reviews as one of the "Best Books of 2014."

Miguel is a graduate of The American Academy of Dramatic Arts. At the academy, Miguel enjoyed studying scripts and dialogue, and especially enjoyed reading Shakespeare plays. It was during this time that he began writing many short-film screenplays, as well as short stories.

Over 30 of Miguel's short stories were chosen for publication and appeared in various magazines and collections. One of his short stories, A Working Professional, won First Place in Writer's Digest Magazine's "Your Story #24" writing contest, and beat out over 550 other international submissions.

Miguel's debut novel was Galadria: Peter Huddleston & The Rites of Passage. Kirkus Reviews declared it "A resounding success that will have audiences begging for more."

Carry the Knight and The Unicorn were released in 2014, The Covens of Elmeeria and The Light Dweller in 2017, Babble Magic and It Took Billy in 2018, and Blue Cloak Warrior in 2020.

Miguel regularly joins many literary events and conventions. He has had his own book booths at the Los Angeles Times Festival of Books and the L.A. Comic Con, as well as the Miami Book Fair Online, and the American Library Association (ALA) Midwinter Virtual Meeting & Exhibits. Miguel also participates in numerous bookstore events, and in particular has enjoyed his book launches at Vroman's Bookstore in Pasadena.

Miguel is an active supporter of Kids Need to Read, a national nonprofit foundation that promotes childhood literacy and provides books to disadvantaged children across America. He is also a member of the International Literacy Association.

Miguel is an active member of SAG-AFTRA. Aside from writing his novels, he has also written feature-length screenplays.