May the Best Man Win (Paperback) 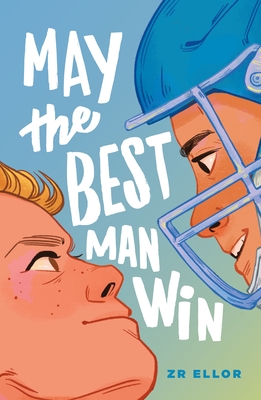 A trans boy enters a throw-down battle for the title of Homecoming King with the boy he dumped last summer in ZR Ellor's contemporary YA debut.

Jeremy Harkiss, cheer captain and student body president, won’t let coming out as a transgender boy ruin his senior year. Instead of bowing to the bigots and outdate school administration, Jeremy decides to make some noise—and how better than by challenging his all-star ex-boyfriend, Lukas for the title of Homecoming King?

Lukas Rivers, football star and head of the Homecoming Committee, is just trying to find order in his life after his older brother’s funeral and the loss of his long-term girlfriend—who turned out to be a boy. But when Jeremy threatens to break his heart and steal his crown, Lukas kick starts a plot to sabotage Jeremy’s campaign.

When both boys take their rivalry too far, the dance is on the verge of being canceled. To save Homecoming, they’ll have to face the hurt they’re both hiding—and the lingering butterflies they can’t deny.

ZR Ellor is an author and literary agent from the Washington, DC area. An avid lifelong reader, he wrote his first novel when he was twelve years old and never put down his pen. He graduated from Cornell University in 2016 with a dual degree in biology and English literature. His non-literary interests include running, travel, and global cuisine. May The Best Man Win is his debut novel.

"Ellor delivers an intense story about self-discovery, pain, and forgiveness. [A] nuanced conversation about the challenges that coming out as trans brings for the transgender person and the relationships they must navigate. Fans of Leah Johnson’s You Should See Me in a Crown (2020) won’t want to miss this thoughtful lovers-to-enemies-to-lovers high-school dramedy with a romantic core." —Booklist, starred review

"Roaring, raging, and riotous, May the Best Man Win is a queer lovers-to-exes-to-enemies-to-lovers romance that will have you rooting for both Jeremy and Lucas to win homecoming king—and each other’s hearts." —The Nerd Daily

“Earnest, charming, and completely unafraid to dive headfirst into the beautifully messy complexity of grief, gender, and growth. May the Best Man Win won my heart completely.” —Becky Albertalli, New York Times–bestselling author of Simon vs. The Homo Sapiens Agenda

“…an utterly fresh romance with messy queer teens falling in and out of love, finding their community, and fighting to be seen. ZR Ellor’s debut puts him on the map as a new, exciting voice.” —Molly Knox Ostertag, author of The Witch Boy

"With effervescent writing and bold, stereotype-defying characters, ZR Ellor crafts a much-needed, nuanced depiction of both gender identity and neurodiversity. May the Best Man Win taught me a little about myself, and had me feeling the school spirit more than I ever did for my own high school!" —Jackson Bird, YouTuber and author of Sorted: Growing Up, Coming Out, and Finding My Place