Fifty Sounds: A Memoir of Language, Learning, and Longing (Hardcover) 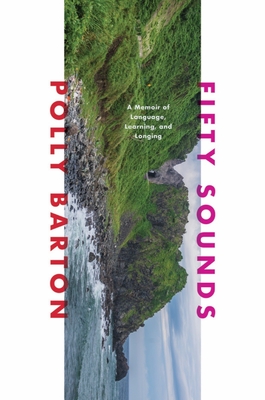 For anyone who has ever yearned to master a new language, Fifty Sounds is a visionary personal account and an indispensable resource for learning to think beyond your mother tongue.

“The language learning I want to talk about is sensory bombardment. It is a possession, a bedevilment, a physical takeover,” writes Polly Barton in her eloquent treatise on this profoundly humbling and gratifying act. Shortly before graduating with a degree in philosophy from the University of Cambridge, Barton on a whim accepted an English-teaching position in Japan. With the characteristic ambivalence of a twenty-one-year-old whose summer—and life—stretched out almost infinitely before her, she moved to a remote island in the Sea of Japan, unaware that this journey would come to define not only her career but her very understanding of her own identity.

Divided into fifty onomatopoeic Japanese phrases, Fifty Sounds recounts Barton’s path to becoming a literary translator fluent in an incredibly difficult vernacular. From “min-min,” the sound of air screaming, to “jin-jin,” the sound of being touched for the first time, Barton analyzes these and countless other foreign sounds and phrases as a means of reflecting on various cultural attitudes, including the nuances of conformity and the challenges of being an outsider in what many consider a hermetically sealed society.

In a tour-de-force of lyrical, playful prose, Barton recalls the stifling humidity that first greeted her on the island along with the incessant hum of peculiar new noises. As Barton taught English to inquisitive middle school children, she studied the basics of Japanese in an inverse way, beginning with simple nouns and phrases, such as “cat,” “dog,” and “Hello, my name is.” But when it came to surrounding herself in the culture, simply mastering the basics wasn’t enough.

Japanese, Barton learned, has three scripts: the phonetic katakana and hiragana (collectively known as kana) and kanji (characters of Chinese origin). Despite her months-long immersion in the language, a word would occasionally produce a sinking feeling and send her sifting through her dictionaries to find the exact meaning. But this is precisely how Barton has come to define language learning: “It is the always-bruised but ever-renewing desire to draw close: to a person, a territory, a culture, an idea, an indefinable feeling.”

Engaging and penetrating, Fifty Sounds chronicles everything from Barton’s most hilarious misinterpretations to her new friends and lovers in Tokyo —and even the influence of Ludwig Wittgenstein’s transformative philosophy. A classic in the making in the tradition of Anne Carson and Rachel Cusk, Fifty Sounds is a celebration of the empowering act of learning to communicate in any new language.

Polly Barton grew up in west London and studied philosophy at the University of Cambridge before travelling with the JET Program to teach English in Japan. Her translations include Spring Garden by Tomoko Shibasaki and Where the Wild Ladies Are by Aoko Matsuda.

Barton as a writer is searching, analytical, sharp.... Reading Barton in critical conversation with other texts—she loves Wittgenstein’s Philosophical Investigations and Anne Carson’s Eros the Bittersweet—is a joy. Particular vignettes, like when she describes the uncomfortable feeling of having to explain her work at a party as giro-giro (the sound of eyes riveting deep into holes in your self-belief, or vicariously visiting the Nocturama, or every party where you have to introduce yourself), or a harmless but softly mortifying exchange with a student’s parent as yochi-yochi (the sound of tottering [at last]), read as revelations.... Barton’s insight into and passion for language is ultimately a wonder.... turning a rather universal experience into something new, exciting, and fresh—a brand new world of speech and meaning to explore.

In a tone that’s contemplative and playful, she ruminates on the works of Barthes, Wittgenstein, and Anne Caron, among others, to offer thought-provoking insights into literary translation as ‘a form of activism’ and refuge . . . Filled with linguistic surprises and a quiet intellect, this is sure to delight language learners and literary readers alike.
— Publishers Weekly

[A] sharp, belletristic debut . . . A refreshingly honest and novel look at the nuance and revelatory power of language.
— Kirkus Reviews, starred review