The Winds of Dune (Compact Disc) 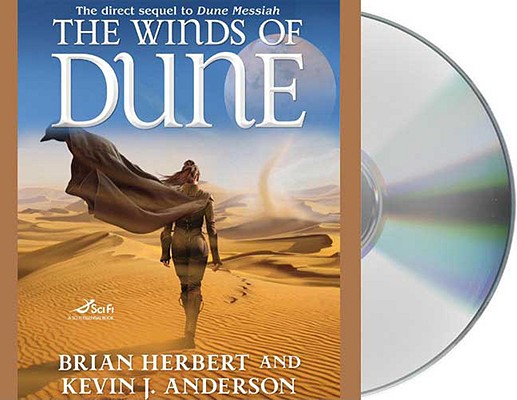 With their usual skill, Brian Herbert and Kevin Anderson have taken ideas left behind by Frank Herbert and filled them with living characters and a true sense of wonder. Where "Paul of Dune" picked up the saga directly after the events of "Dune," "The Winds of Dune" begins after the events of "Dune Messiah."
Paul has walked off into the sand, blind, and is presumed dead. Jessica and Gurney are on Caladan; Alia is trying to hold the Imperial government together with Duncan; Mohiam dead at the hands of Stilgar; Irulan imprisoned. Paul's former friend, Bronso of Ix, now seems to be leading opposition to the House of Atreides. Herbert and Anderson's newest book in this landmark series will concentrate on these characters as well the growing battle between Jessica, and her daughter, Alia.

Brian Herbert has been nominated for both the Hugo and the Nebula Awards. In 2003, he published "Dreamer of Dune," a Hugo Award-nominated biography of his father.

Kevin J. Anderson has been nominated for the Nebula Award, the Bram Stoker Award, and the SFX Reader's Choice Award. He set the Guinness-certified world record for the largest single-author book signing. Scott Brick has narrated for many popular authors, including Michael Pollan, Joseph Finder, Tom Clancy, and Ayn Rand. He has also won over 40 "AudioFile" Earphones Awards and the "AudioFile" award for Best Voice in Mystery and Suspense 2011. In 2007, Brick was named "Publishers Weekly"'s Narrator of the Year.

"Scott Brick delivers an impressive one-man show. Brick's voice is ideally suited to this sprawling story, the second book in the Heroes of Dune trilogy. In many scenes Brick must handle differentiating between the speech and thoughts of the various characters, and he does so with aplomb...Listeners will be glued to the high drama." - AudioFile "This is actually a very good story, easy to listen to and becomes more involved as the metaphorically speaking pages are turned...Once again, Macmillan has produced a polished product and with Scott Brick narrating, you can be sure the story is well delivered." —SFcrowsnest