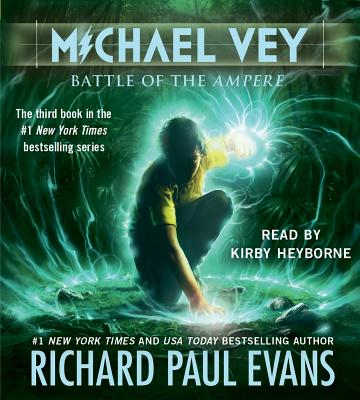 By Richard Paul Evans, Kirby Heyborne (Read by)
$29.99
Email or call for price.

This is book number 3 in the Michael Vey series.

Michael, Taylor, Ostin and the rest of the Electroclan have destroyed the largest of the Elgen Starxource plants, but now they’re scattered across the Amazon jungle. The Elgen have joined forces with the Peruvian army to capture the Electroclan, and only Michael has managed to remain free. With his friends due to stand trial for terrorism—a charge that may carry the death penalty—Michael will need all his wits and his abilities if he’s to save them.

Meanwhile, on the other side of the world, Dr. Hatch and his loyal Electric Children have seized control of the E.S. Ampere—the super yacht the Elgen use as their headquarters. With the Elgen fleet now under his control, Hatch heads back to Peru to pick up his army and then begin his quest for global domination.

Michael will have to free his friends then find a way to stop Hatch, but the organization behind the mysterious voice that has guided him to this point has been compromised. Hatch knows Michael and the Electroclan are coming. And he’s ready for them.

Can the Electroclan win the battle of the Ampere? Or has Michael’s luck finally run out?