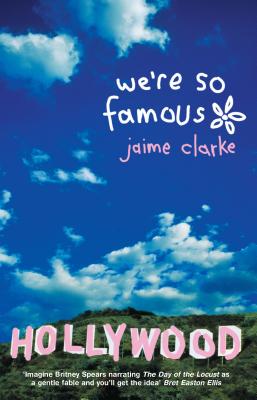 Daisy, Paque and Stella want to be famous. Inspired by their idols, Bananarama, they form a pop group of their own. But Stella heads to LA to become an actress and lusting after bad-boy rocker Bryan Metro. Paque and Daisy, without Stella, are just about ready to call it quits when two friends are mysteriously murdered. They, the last people to see the victims alive, become the prime suspects and cashing in on this sudden notoriety, record their first hit. And the adventure is only just beginning.

Jaime Clarke is a graduate of the University of Arizona and holds an MFA from Bennington College. He is the author of the novels We're So Famous, Vernon Downs, World Gone Water and Garden Lakes; the editor of the anthologies Don't You Forget About Me: Contemporary Writers on the Films of John Hughes, Conversations with Jonathan Lethem, and Talk Show: On the Couch with Contemporary Writers; and co-editor of the anthologies No Near Exit: Writers Select Their Favorite Work from Post Road Magazine (with Mary Cotton) and Boston Noir 2: The Classics (with Dennis Lehane and Mary Cotton). He is a founding editor of the literary magazine Post Road, now published at Boston College, and co-owner, with his wife, of Newtonville Books, an independent bookstore in Boston.