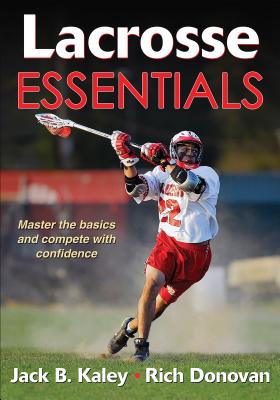 Step on the field and begin playing in no time! In Lacrosse Essentials, you’ll learn the fundamentals of the sport through sequential instructions, detailed photo sequences, and expert advice from coaching legend Jack Kaley and longtime coach Rich Donovan.

Lacrosse Essentials takes you inside the game, covering these essential skills and strategies:

In addition to mastering the fundamentals, you’ll be challenged to expand your repertoire of skills and use those techniques and tactics for a competitive advantage. The many activities and drills will speed learning and improve performance. You’ll also get the latest information on offensive and defensive strategies, systems, and situational play to take your game to the next level.

Lacrosse Essentials is the best—and quickest—way to learn, practice, and play the great sport of lacrosse.

Jack B. Kaley is the all-time leader in winning percentage (84%) for Division I and II universities and has been the head coach for the German national lacrosse team since 2002. His record of 185-33 at the New York Institute of Technology (NYIT) occurred at an academic institution that had discontinued men’s lacrosse in 1978. His efforts in recruiting student-athletes to a commuter school as a part-time coach with limited resources showed positive results in the 1993 inaugural season with a No. 5 national ranking followed by an undefeated regular season in 1994, which culminated in the first of six National Championship appearances. This launched a 17-year run of excellence, which included four National Championships, a record four-time recognition as National Coach of the Year, and 75 All-American selections. Kaley amassed a 507-176 record while coaching Lynbrook High School, East Meadow High School, Long Island Lacrosse Club, Hampstead Lacrosse Club, and the German National Team. He lives in Westbury, New York.

Rich Donovan is an assistant coach for the German National Lacrosse Team; the boys’ lacrosse coach at The Wheatley School in Long Island, New York; and an official with the Nassau County Lacrosse Officials Association. He began his career in lacrosse at East Meadow High School in New York and then played for the University of Massachusetts (1975-78), where he was a team captain, four-year varsity starter and letter winner on a team that enjoyed two NCAA tournament appearances. He began his coaching career at the University of Massachusetts in 1979 and had subsequent coaching jobs at CW Post College from 1983 to 1985, Hofstra University from 1986 to 1995, and several high schools in Long Island from 1980 to 1982 and from 1996 to the present, and Bridgeport Barrage (Major Lacrosse League) in 2002. Richard lives in East Meadow, New York.

“Many of my attitudes, drills, and practice plans are a direct result of the time that I spent under the tutelage of Coach Kaley. He is the consummate teacher and coach, and his book belongs in your library!”

“Coaches and players, both nationally and internationally, have needed a book that details both fundamentals and the finer points of the game. Jack has achieved this goal with Lacrosse Essentials. It deserves to be in every coach’s library.”

“Jack Kaley is one of the all-time great coaches on the high school, college, post-college, and international levels. Lacrosse Essentials is a great source of lacrosse knowledge for all coaches.”

“Lacrosse Essentials is a book every lacrosse coach should read in its entirety. A great resource written by two of the top lacrosse experts who have coaching experience at all levels—youth, high school, collegiate, professional, and international. The book is geared to every level of coaching. All aspects of lacrosse are covered: skill fundamentals, drills with diagrams, and schemes.”

“Coach Donovan and Coach Kaley have demonstrated again why they are two of the finest lacrosse tacticians around. Lacrosse Essentials is a very thorough presentation of each aspect of our game. It’s perfect for youth players and coaches. This book builds up from the fundamentals and brings you to the present-day sets for both defense and offense. I couldn’t find a better coaching aid anywhere!”

“At long last the lacrosse community has received a well-written guide. Coach Kaley and Coach Donovan are great ambassadors of our game.”

“Lacrosse Essentials is an important addition to a limited library in our sport. Players, coaches, and fans at all levels will benefit from keeping this book nearby. Hats off to Jack and Rich for this easy-to-read chronicle of individual technique and team development.”