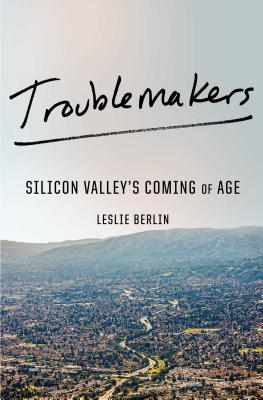 At a time when the five most valuable companies on the planet are high-tech firms and nearly half of Americans say they cannot live without their cell phones, Troublemakers reveals the untold story of how we got here. This is the gripping tale of seven exceptional men and women, pioneers of Silicon Valley in the 1970s and early 1980s. Together, they worked across generations, industries, and companies to bring technology from Pentagon offices and university laboratories to the rest of us. In doing so, they changed the world.

During these same years, the first ARPANET transmission came into a Stanford lab, the university began licensing faculty innovations to businesses, and the Silicon Valley tech community began mobilizing to develop the lobbying clout and influence that have become critical components of modern American politics. In other words, these were the years when one of the most powerful pillars of our modern innovation and political systems was first erected.

Featured among well-known Silicon Valley innovators like Steve Jobs, Regis McKenna, Larry Ellison, and Don Valentine are Mike Markkula, the underappreciated chairman of Apple who owned one-third of the company; Bob Taylor, who kick-started the Arpanet and masterminded the personal computer; software entrepreneur Sandra Kurtzig, the first woman to take a technology company public; Bob Swanson, the cofounder of Genentech; Al Alcorn, the Atari engineer behind the first wildly successful video game; Fawn Alvarez, who rose from an assembler on a factory line to the executive suite; and Niels Reimers, the Stanford administrator who changed how university innovations reach the public. Together, these troublemakers rewrote the rules and invented the future.

Leslie Berlin is Project Historian for the Silicon Valley Archives at Stanford University. She has been a Fellow at the Center for Advanced Studies in the Behavioral Sciences and served on the advisory committee to the Lemelson Center for the Study of Invention and Innovation at the Smithsonian’s National Museum of American History. She received her PhD in History from Stanford and her BA in American Studies from Yale. She has two college-age children and lives in Silicon Valley with her husband, whom she has known since they were both twelve years old. She is the author of Troublemakers.

“[A] deeply researched and dramatic narrative of Silicon Valley’s early years….meticulously told stories permit the reader to gain a nuanced understanding of the emergence of the broader technology ecosystem that has enabled Silicon Valley to thrive…compelling history.”—The New York Times

“Leslie Berlin is a master historian of Silicon Valley, and the publication of this book is a landmark event. Kaleidoscopic, ambitious, and brilliant, the book draws on a dazzling cast of characters to chart the rise of the five industries that have come to define technology today and, collectively, to remake the world."—Eric Schmidt, former CEO of Google and Executive Chairman of Alphabet, Inc.

"Leslie Berlin combines the keen observations of an historian with gorgeous writing and riveting storytelling to write the landmark book on the Valley. The interwoven lives of wonderfully iconoclastic characters bring the formative years of the Valley to life with sheer brilliance. Troublemakers is a must-read for anyone hoping to understand America’s tech capital.”—Julia Flynn Siler, New York Times bestselling author of The House of Mondavi

"Engrossing...Troublemakers offers a corrective to the regnant great man theory of technological progress of which the virtuosic Mr. Jobs is exhibit A. In narrating these innovations, Berlin shows the village that brought them forth."—San Francisco Chronicle

“In this vigorous account, the first days were the hardest—and, all in all, involved the most interesting players. ... A sturdy, skillfully constructed work.”—Kirkus Reviews

“Leslie Berlin has done it again. Following on her richly informative biography of Intel co-founder Robert Noyce, The Man Behind the Microchip, Berlin now brings us a definitive account of Silicon Valley’s “breakthrough years” in the 1970s. Troublemakers recounts the fascinating careers of six little-known but enormously impactful players who shaped the Valley’s unique high-tech ecosystem. As entertaining as it is authoritative, Troublemakers is required reading for anyone seeking to understand how the tech revolution took root in the San Francisco Bay Area and eventually transformed the entire planet’s way of life.”—David M. Kennedy,  Donald J. McLachlan Professor of History Emeritus at Stanford University, winner of the Pulitzer Prize

“While it is a hefty tome, the book is compelling as it maps out the “building” of the Valley, the challenges its early tech pioneers faced, as well highlighting those who reached dizzying success only to suffer as the dotcom bubble burst.”—FINANCIAL TIMES

“There is much to learn from Berlin’s account, particularly that Silicon Valley has long provided the backdrop where technology, elite education, institutional capital, and entrepreneurship collide with incredible force.”—CHRISTIAN SCIENCE MONITOR