The Gay Revolution: The Story of the Struggle (Hardcover) 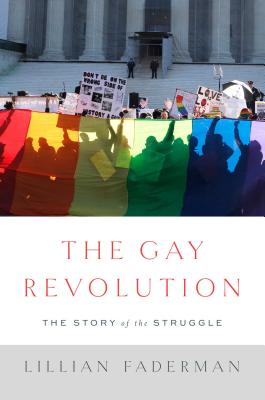 “The most comprehensive history to date of America’s gay-rights movement.” —The Economist

The sweeping story of the modern struggle for gay, lesbian, and trans rights—from the 1950s to the present—based on amazing interviews with politicians, military figures, legal activists, and members of the entire LGBT community who face these challenges every day.

The fight for gay, lesbian, and trans civil rights—the years of outrageous injustice, the early battles, the heart-breaking defeats, and the victories beyond the dreams of the gay rights pioneers—is the most important civil rights issue of the present day. Based on rigorous research and more than 150 interviews, The Gay Revolution tells this unfinished story not through dry facts but through dramatic accounts of passionate struggles, with all the sweep, depth, and intricacies only an award-winning activist, scholar, and novelist like Lillian Faderman can evoke.

The Gay Revolution begins in the 1950s, when law classified gays and lesbians as criminals, the psychiatric profession saw them as mentally ill, the churches saw them as sinners, and society victimized them with irrational hatred. Against this dark backdrop, a few brave people began to fight back, paving the way for the revolutionary changes of the 1960s and beyond. Faderman discusses the protests in the 1960s; the counter reaction of the 1970s and early eighties; the decimated but united community during the AIDS epidemic; and the current hurdles for the right to marriage equality.

In the words of the eyewitnesses who were there through the most critical events, The Gay Revolution paints a nuanced portrait of the LGBT civil rights movement. A defining account, this is the most complete and authoritative book of its kind.

Lillian Faderman is an internationally known scholar of lesbian history and literature, as well as ethnic history and literature. Among her many honors are six Lambda Literary Awards, two American Library Association Awards, and several lifetime achievement awards for scholarship. She is the author of The Gay Revolution and the New York Times Notable Books, Surpassing the Love of Men and Odd Girls and Twilight Lovers.

“This is the history of the gay and lesbian movement that we’ve been waiting for: compulsively readable, carefully anchored in the historical record, overflowing with riveting stories, human peculiarities and thoughtful analysis of the messy political contradictions that dogged this untidy movement. Other books have purported to explain how the unruly LGBT movement triumphed. The Gay Revolution succeeds.”

“The greatest literary achievement chronicling our struggle for equal rights, human rights, liberation, and finally, civil rights. . . . The Gay Revolution should be taught in every civil rights class in every high school and on every campus. And everyone, all of you, should buy it and read it. I won’t ask you to do it for us, the old ones who gave so much for so many decades (although I want to ask, but I don’t need to guilt you). I will ask you to do it because this is the most honest, compelling history of our movement, and if you participated, you will love remembering, and if you did not, it will inspire you to passionately rise up and get involved.”

“The most comprehensive history to date of America’s gay-rights movement. . . . Ms Faderman has ably drawn the map that future historians of the struggle will use to chart their courses.”

“Stirring . . . the depth of [Faderman’s] research is breathtaking, as is her engaging style that illuminates the individual stories of many who faced countless injustices because of their sexual identity. Her cogent investigative style encompasses the breadth of a hidden, disparate and despised community that transformed itself into a powerful civil-rights movement. . . . The Gay Revolution is a cogent, definitive history of the movement and a towering achievement by Lillian Faderman. It belongs in every GLBTQ home, definitely available in every public school library and sent to every homophobic politician in Washington.”

“One of queer history's founding scholars, Faderman, has written a sweeping and moving narrative that chronicles the fight for lesbian, gay, bisexual, transgender and queer (LGBTQ) citizenship rights from World War II to the turn of the millennium. . . . this volume will deservedly become a standard in the field. . . . highly recommended for readers interested in the 20th-century politics of sexual identity and the history of social justice activism.”

“[A] superbly researched book . . .Throughout this engaging and extremely well-documented book, Faderman clearly shows that for the LGBT community, equality is not a completed goal. Yet the ideal of fully integrated citizenship is closer to becoming reality than ever before. Inspiring and necessary reading for all Americans interested in social justice.”

"Faderman’s immense cultural history will give today’s LGBTQ activists both a profound appreciation of their forebears and the motivation to carry the struggle forward."

“The Gay Revolution fills a yawning gap in history literature. The arrival of this new work is timely. This passionate narrative will be recognized as a story that ennobles the human spirit and upholds the democratic ideals at the heart of this country’s founding documents.”
— David Carter, author of "Stonewall: The Riots That Sparked the Gay Revolution"

“Lillian Faderman once again shows why she is the definitive voice for gay and lesbian history. This book is a ‘must read’ for anyone who wants to know the stories behind the brave faces that created a new civil rights movement.”
— Brigadier General Tammy Smith

“As gay people approach equality under the law, Faderman charts the course that brought such remarkable change so swiftly. It’s a dynamic book that matches the power of the movement it describes.”
— Cleve Jones, founder of the NAMES Project AIDS Memorial Quilt

“I am large, I contain multitudes,” sang Whitman, and it’s the unprecedented compiling of multitudes of individual stories, journeys, acts of courage, stands of defiance, failures, and advances that distinguishes Faderman’s sweeping history of transformation.”
— Evan Wolfson, pioneering advocate of same-sex marriage and founder of Freedom to Marry

“Faderman has crafted an epic yet remarkably intimate work that belongs among the most definitive civil rights titles, LGBT-specific or otherwise…This book is destined to be one of the lasting contributions to the literature of the gay rights movement.”

“The Gay Revolution is an extraordinarily well-documented history of how gay equality is moving toward reality. . . . Faderman describes our collective history, which was not a homogenous effort but amazingly has moved us toward marriage equality and social justice.”
— Colonel (ret) Margarethe Cammermeyer, highest ranking officer to challenge the military’s anti-gay policy

“The Gay Revolution is the definitive history of the gay rights movement in America. This book will play with your emotions as Lillian Faderman takes the reader on a roller coaster ride of the victories and sacrifice made by the LGBT community and its allies to arrive at this point in time. This is the story of civil rights for the 21st century!”
— Reverend Troy D Perry, Founder of the LGBT Metropolitan Community Churches

“A compelling read of a little-known part of our nation's history, and of individuals whose stories range from heart-wrenching to inspiring to enraging to motivational.”

“Faderman . . . vividly brings to life the fight for LGBT rights in the United States . . . This mammoth undertaking runs more than 800 pages, but it is highly readable, superbly researched and filled with fascinating stories. . . . This an essential guide to the gay and lesbian movement, brought to life by a meticulous historian who is also a natural storyteller. Discover: The fascinating people and their heroic actions behind decades' worth of gradual change in the fight for LGBT civil rights in the United States.”

“Anyone who wants to understand the gay rights movement and the profound impact it has had on the United States would do well to consult this eminently readable and well-researched book.”

“Unquestionably, a landmark book and will likely be the template by which subsequent scholarship on our collective lesbian and gay history will be judged. . . . It’s a massive undertaking and Faderman approaches it with diligence, tenacity and just the right touch of awe. . . . It is both mesmerizing and gutting to read this book . . . Faderman takes us on the journey and her book will astound with the various vistas of our collective history. . . . riveting . . . The totality of this history is amazing, frustrating, daunting stuff and Faderman takes us on the journey with the sureness of a tour guide who has been on this path for decades–as she has been–collecting her research, honing her individual theses, presenting her conclusions with finality. . . . For those of us who have come of queer age post-Stonewall, it’s a record of personal experience as well as larger history and Faderman brings it to vivid, emotional life with her many stories of individuals folded into her monumental scholarship. A must read.”

“The Gay Revolution will equip readers with a greater knowledge of the movement’s history, and an appreciation for the crucial role of individual acts of courage in winning and safeguarding equality. And it’s a great read.”