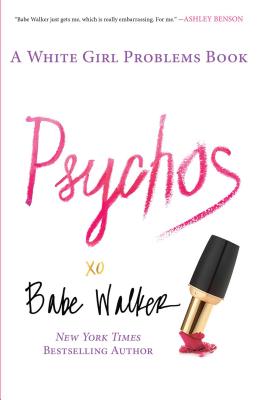 In this hysterical follow-up to the New York Times bestseller White Girl Problems, Babe Walker travels the globe as she tries to figure out the answer to the question foremost on everyone's mind—including hers: Who is Babe Walker?

If you’re one of the hundreds of thousands who devoured Babe Walker’s New York Times bestselling novel White Girl Problems or one of the million people who read her blog or follow her on Twitter daily, then you’ve obviously been waiting with bated breath for her hilarious follow-up novel, Psychos.

Fresh from a four-month stint in rehab for her “alleged” shopping addiction, Babe Walker returns home to Bel Air ten pounds lighter (thanks to a stomach virus), having made amends (she told a counselor with bad skin she was smart) and confronted her past (after meeting her birth mother for the first time—a fashion model turned farmer lesbian). Although delighted to be home and determined to maintain her hard-won inner peace, Babe now faces a host of outside forces seemingly intent on derailing her path to positive change. Not only is she being trailed by an anonymous stalker, but she’s also reunited with the love of her life, a relationship that she cannot seem to stop self-sabotaging.

Babe’s newfound spirituality, coupled with her faith in the universe and its messages, leads her all over the world: shoulder dancing in Paris, tripping out in Amsterdam, and hooking up in the Mediterranean, only to land her back in New York City, forced to choose between a man who is perfect in every way (except for one small detail) and a man who could be The One if only he didn’t drive Babe to utter insanity.

Unapologetic and uproarious, Psychos is the send-up of the season—already as timeless as vintage Dior.

Babe Walker is a New York Times bestselling author, which is insane. She lives in Los Angeles. You can find her on Twitter @WhiteGrlProblem, Instagram @BabeWalker, and Facebook at Facebook.com/TheBabeWalker. She co-owns Swish (makers of White Girl Rosé and Babe Rosé With Bubbles) with the Fat Jew, also super insane.

“Babe Walker just gets me, which is really embarrassing. For me.”
— Ashley Benson

"Babe Walker makes me want to be a better person."
— Elizabeth Banks

"A book so full of toxicity that I needed to see a healer when I was finished."
— Jake Shears

“Babe’s wildly popular Twitter persona, blog, and books are the creation of three actor-writer friends who use their creation’s ludicrous observations and exploits to skewer the shallow ultra rich.”
— Booklist

“Her laugh-out-loud antics will leave you wanting even more.”
— PEOPLE Magazine