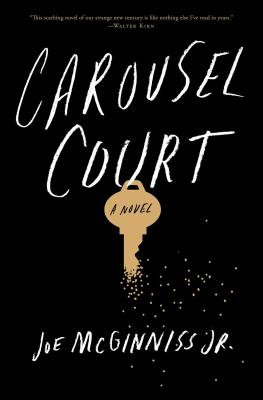 “Carousel Court begins with the decline of a marriage as members of the Maguire family find themselves in the suburbs of Los Angeles, struggling to hold onto their last vestiges of power to control what feels like the free fall of their lives. Examining the paradox of both our over-connected and disconnected world, McGinniss' clear voice is beautifully balanced with the dark desperation he reveals as the all-too-common silent partner of our lives. This is a powerful book that should not be missed!”
— Luisa Smith (E), Book Passage, Corte Madera, CA

Finalist for the 2016 Kirkus Prize for Fiction

“A fearless novel about a family and a society on the brink…Harrowing but, against all odds, ultimately tender.” —O, The Oprah Magazine

“Fast…Foreboding…This couple will stop at nothing to keep their house and marriage afloat….McGinniss spins an edgy tale, often laced with a reporter’s eye for the little details that make characters pop.” —The Washington Post

“Riveting…McGinniss is poised to become one of our sharpest observers of life in America at the start of the twenty-first century.” —Kirkus Reviews (starred review)

Here is one of the most engrossing, unnerving, and exhilarating novels in recent memory. It comes to us from Joe McGinniss Jr., whose first book, The Delivery Man, was a national bestseller that critics hailed as “searing” (The New York Times Book Review), “compelling” (The Washington Post), and “reminiscent of Joan Didion” (Janet Fitch). Now, after spending the better part of a decade at work, McGinniss returns with another viscerally absorbing look at the seductive—and destructive—cutting edge of modern life, this time through the lens of marriage.

Carousel Court is the story of Nick and Phoebe Maguire, a young couple who move cross-country to Southern California in search of a fresh start for themselves and their infant son following a trauma. But they arrive at the worst possible economic time. Instead of landing in a beachside property, Nick and Phoebe find themselves cemented into the dark heart of foreclosure alley, surrounded by neighbors being drowned by their underwater homes who set fire to their belongings, flee in the dead of night, and eye one another with suspicion while keeping shotguns by their beds. Trapped, broke, and increasingly desperate, Nick and Phoebe each devise their own plan to claw their way back into the middle class and beyond. Hatched under one roof, their two separate, secret agendas will inevitably collide.

Combining the excruciating honesty of Richard Yates’s Revolutionary Road with the social urgency of George Packer’s The Unwinding, Carousel Court is a blistering and unforgettable vision of contemporary life. It has the ambition of our most serious literary work and the soul of a thriller, managing to be simultaneously sexy, scary, and powerfully moving. Most of all, it offers an unflinching portrait of modern marriage in a nation scarred by vanished jobs, abandoned homes, psychotropic cure-alls, infidelity via iPhone, and ruthless choices. No matter what kind of relationship you are in, it will leave you simultaneously gutted and grateful for your own good fortune—if perhaps curious what your partner is really up to on that electronic device across the living room.

Joe McGinniss Jr. is the author of Carousel Court and The Delivery Man. He lives in Washington, DC, with his family.

Finalist for the 2016 Kirkus Prize for Fiction

An Indie Next Selection of Independent Booksellers

One of USA Today’s “Hottest Books”

One of Men’s Journal’s “Best Books of August”

One of The Millions’ “Most Anticipated Books of the Year”

“A fearless novel about a family and a society on the brink . . . Harrowing but, against all odds, ultimately tender . . . [Nick and Phoebe] offer the possibility of a simple but enormous grace: that we may fail and still be loved, if only imperfectly, if only for a time.”
—O, The Oprah Magazine

“Propulsive . . . Carousel Court is a raw, close-up portrait of a married couple tormented by money problems in the midst of a national recession. . . . The result is thrilling and uncomfortable—a novel that dwells in the filth of love and hate and blame and money in post-crash America with an intimacy that never lets up. . . . The marriage starts to feel not just tense but enormously dangerous. . . . It’s very hard to look away.”
—Los Angeles Times

“Fast . . . Foreboding . . . This couple will stop at nothing to keep their house and marriage afloat. . . . McGinniss spins an edgy tale, often laced with a reporter’s eye for the little details that make characters pop and convey a sarcastic take on what a certain slice of people need nowadays to feel uplifted: anti-anxiety pills, yes, but also the produce section of Whole Foods, where Phoebe has spent so much time that she’s learned ‘the fine mist showering the mustard greens, arugula, and summer squash is on a forty-second cycle—ten seconds on, thirty seconds off.’”
—The Washington Post

“Amazing . . . Raucously inventive . . . McGinniss’s gorgeous prose captures the agony of the ‘moaning winds and anguished cries coming from the bone-dry hills’ as well as the rare beauty of a day when ‘everything pops: the colors, the people, the thick, warm aroma of coffee, the bright sunlight.’ But he’s also a master at character, juxtaposing shallow Millennials with Phoebe and Nick, pointing out how the younger generation has ‘a margin for error’ that Phoebe and Nick simply can’t afford at their stage in life.”
—San Francisco Chronicle

“McGinniss is poised to become one of our sharpest observers of life in America at the start of the 21st century. . . . Watching things get ugly for Nick and Phoebe is riveting. . . . What makes the reader turn the pages of Carousel Court isn’t the tragedy that befalls Nick and Phoebe—it’s the threat of tragedy. The couple and their toddler are skating on the edge of a razor blade and the reader is hooked by their struggle to put their lives back together.”
—Kirkus Reviews

“Carousel Court is a gritty, raw novel that will have readers recalling the icy relationships found in Gillian Flynn’s Gone Girl and Adam Ross’s Mr. Peanut. McGinniss’s work is built on layers of tension and dark turns that, at times, surpass the twisted works of his contemporaries. . . . McGinniss deserves a lot of credit for handling the darkness so well. He never seems to overdo it. When he gets close to the edge, he adds in just the right amount of humor.”
—Electric Literature

“A novel of unrelenting tension . . . Phoebe is a lexicon of contradictions, a kind of update on Maria Wyeth of Joan Didion’s Play It as It Lays. McGinniss also recalls Nathanael West’s Day of the Locust in depicting their road, Carousel Court, as a catalog of strangeness and dangers: from coyotes and marauding home invaders to weird neighbors and crying, screaming cicadas. McGinniss . . . injects it with an urgency, a sense of constant, inescapable threat that all adds up to a taut page-turner.”
—Kirkus Reviews (starred review)

“Propulsive . . . The novel’s nearly 100 vignettes—many of them gems of concision and electric prose that lay bare the darker sides of Nick and Phoebe, as well as the handful of coworkers and eccentric neighbors who swirl down the drain with them—mirror the discontent seething just beneath the surface of an ersatz American dream. . . . McGinniss is at his best when describing, with anthropological intensity, the throes of a broken relationship.”
—Publishers Weekly

“Gripping . . . A portrait of a marriage as volatile as the economy.”
—The Millions

“McGinniss writes with a keen feel for the contemporary zeitgeist. . . . His characters in Carousel Court move in a brutal world of broken personal connections, social unrest, and financial desperation. . . . Yet McGinniss opens a window of hope as Nick and Phoebe survive the mess they make of their lives.”
—Shelf Awareness (starred review)

“Here it is, the leveraged, frayed, unfaithful, buzzed America that all the baloney entertainment products, including a lot that pose as literature, are designed to cover up. Can you handle the truth? Then step inside. This scathing novel of our strange new century is like nothing else I’ve read in years.”
—Walter Kirn, author of Up in the Air

“Harrowing, smart, wickedly accurate about the third world of the contemporary United States, and very well written.”
—Lionel Shriver, author of We Need to Talk about Kevin

“Carousel Court showcases a domestic circus of the most compelling kind: a kaleidoscopic train-wreck of a marriage set ablaze by the bright white hyperreality of a California suburb in decline. Joe McGinniss Jr. writes with wit and scorching honesty about adultery, addiction, and financial ruin, never losing sight of his characters’ humanity and their fractured hope that redemption might be possible after all.”
—Carolyn Parkhurst, author of The Dogs of Babel and Lost and Found

“Carousel Court pulls no punches, taking on nothing less than marriage, and the false promises of our American Dream. These are great big subjects and Joe McGinniss Jr. is more than up to them. Mature and smart and in control of his arsenal, he writes tenderly about family and parenthood, and is every bit as clear-eyed when the subject is underwater mortgages or secret sexting. The result is a hell of a roller coaster. Strap yourself.”
—Charles Bock, author of Beautiful Children

“In urgent, kaleidoscopic prose, Joe McGinniss Jr. diagnoses the American Dream with a high fever, jaundice, and severe heartburn. Set in a simmering suburban Los Angeles, Carousel Court is the portrait of a disastrous but thoroughly modern marriage whose young wife, Phoebe Maguire, is hurtling toward a pill-fueled implosion that’s impossible to look away from. The pitch-perfect ending reverberates like a handbell after a hurricane.”
—Kate Christensen, author of The Great Man

Praise for The Delivery Man

“A brisk, bleak debut novel . . . McGinniss manages to whip the yearning and confusion of the woefully inarticulate Chase into dramatic, even gripping fare. . . . The Delivery Man offers unflinching glimpses at mores in free fall. . . . Searing . . . Memorable . . . Not for the faint of heart.”
—Ed Park, The New York Times Book Review

“McGinniss offers a fresh take on the seamy side of Vegas by focusing on the wasted lives of burned-out teens hooked on drugs and money. Even CSI doesn’t dig this deep.”
—Carol Memmott, USA Today

“It’s sex, drugs, and a slew of lost souls in this engrossing story of a twenty-five-year-old known only as Chase. An out-of-luck wannabe artist, he retreats to his hometown—that being Vegas, a downward spiral ensues, thanks to madams and more. . . . Could The Delivery Man be this decade’s Less Than Zero?”
—Marie Claire

“The Delivery Man is balls-out scary. . . . It’s a world where everyone’s too young and too high, and no one expects to live ‘til thirty. . . . A fast-paced read [that] packs a wallop.”
—Courtney Ferguson, Portland Mercury

“Impressive . . . What is most striking about this novel is McGinniss’s sense of place. He captures the bright bleakness of the Las Vegas beyond the Strip—the Las Vegas people actually have to live in—with an unpitying eye, a Las Vegas most of the characters loathe but seem incapable of leaving, like chips that can’t be cashed in.”
—Robert Cremins, Houston Chronicle

“An insider’s guide to the dark underbelly of twenty-first-century Las Vegas, brimming with brand names, hard bodies, hard drugs, and heavy doses of sex and violence. If that’s all you’re looking for, The Delivery Man won’t disappoint. . . . But once you finish it, you won’t be able to get it out of your mind. . . . The Delivery Man is that rare first novel that could well become a classic.”
—Peter Bloch, Penthouse

“A gripping literary thriller and an auspicious debut.”
—George Pelecanos