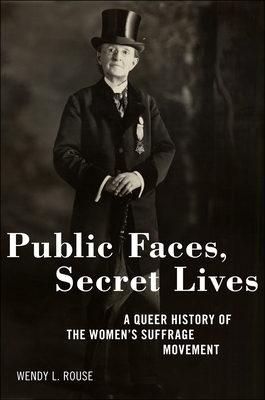 The women's suffrage movement, much like many other civil rights movements, has an important and often unrecognized queer history. In Public Faces, Secret Lives Wendy L. Rouse reveals that, contrary to popular belief, the suffrage movement included a variety of individuals who represented a range of genders and sexualities. However, owing to the constant pressure to present a "respectable" public image, suffrage leaders publicly conformed to gendered views of ideal womanhood in order to make women's suffrage more palatable to the public. Rouse argues that queer suffragists did take meaningful action to assert their identities and legacies by challenging traditional concepts of domesticity, family, space, and death in both subtly subversive and radically transformative ways. Queer suffragists also built lasting alliances and developed innovative strategies in order to protect their most intimate relationships, ones that were ultimately crucial to the success of the suffrage movement. Public Faces, Secret Lives is the first work to truly recenter queer figures in the women's suffrage movement, highlighting their immense contributions as well as their numerous sacrifices.

Wendy L. Rouse is Associate Professor of History at San Jose State University and the author of Her Own Hero: The Origins of the Women's Self-Defence Movement (NYU, 2017) and Public Faces, Private Lives: A Queer HIstory of the Suffrage Movement (NYU, 2022).