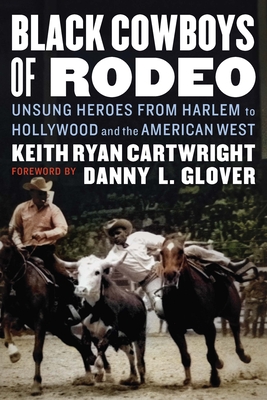 They ride horses, rope calves, buck broncos, ride and fight bulls, and even wrestle steers. They are Black cowboys, and the legacies of their pursuits intersect with those of America’s struggle for racial equality, human rights, and social justice.
Keith Ryan Cartwright brings to life the stories of such pioneers as Cleo Hearn, the first Black cowboy to professionally rope in the Rodeo Cowboy Association; Myrtis Dightman, who became known as the Jackie Robinson of Rodeo after being the first Black cowboy to qualify for the National Finals Rodeo; and Tex Williams, the first Black cowboy to become a state high school rodeo champion in Texas.

Black Cowboys of Rodeo is a collection of one hundred years of stories, told by these revolutionary Black pioneers themselves and set against the backdrop of Reconstruction, Jim Crow, segregation, the civil rights movement, and eventually the integration of a racially divided country.

Keith Ryan Cartwright is a communications specialist for the Rutherford County Board of Education in Tennessee, an adjunct professor at Middle Tennessee State University, and a journalist. He previously served as editorial director and senior writer for Professional Bull Riders Inc. and is the author of Professional Bull Riders: The Official Guide to the Toughest Sport on Earth. Danny L. Glover is an actor, producer, and humanitarian.

"The myths and legend of the American West meet the real-life struggles and triumphs of Black cowboys in this fascinating account from journalist Cartwright. . . . This stirring history will have readers rethinking the very definition of Americana."—Publishers Weekly, starred review

“Keith Ryan Cartwright’s book is an essential corrective to the lily-white history of the cowboy and the American West that has been promoted by motion pictures and white supremacists for centuries. It works as both a sweeping look at the cowboy ethos and profiles of scores of [those] whose greatness made America.”—Nelson George, author, filmmaker, music and culture critic


“Can I get a yee-haw? Black Cowboys of Rodeo is a marvel of a book—built with muscular research and smooth writing, resurrecting larger-than-life characters who will amaze and inspire readers. Cowboys have long been symbols of American grit and self-reliance. Black cowboys are that and more. Thank goodness their stories are finally being told—and told so beautifully.”—Jonathan Eig, best-selling author of Ali: A Life


“Hollywood has not always been on the right side of history when it comes to portraying Black cowboys, but a thoroughly researched book like Black Cowboys of Rodeo finally amends that narrative.”—Blair Underwood, actor, producer, and director


“Keith Ryan Cartwright’s masterful excavation of the contribution of Black cowboys to American history is both rich and timely. The engaging stories of the individuals in Black Cowboys of Rodeo chronicle the lives and struggles of men who were not only field hands and laborers but family men, businessmen, entertainers, and entrepreneurs. This book will be illuminating to many still unfamiliar with the important role they played in the taming and shaping of the American West.”—Yohuru Williams, founding director of the Racial Justice Initiative at the University of St. Thomas


“Keith Ryan Cartwright is a master storyteller, who has accomplished what could be considered his life’s work in his first attempt. This is a very important book coming at an equally important time.”—Ty Murray, nine-time Professional Rodeo Cowboys Association world champion

“From the Gene Autry epigraph that opens it, this entire book is a revelation—a lively and comprehensive look at a subculture, but one that spills its bounds to become a sweeping panorama of American life. Depression-era foreclosures, the Tomb of the Unknown Soldier, crashing the Oscars, John Wayne’s Dollar and Roy Rogers’s Trigger, plus cameos from Willie Nelson, Medgar Evers, Aretha Franklin’s ex-husband, and Muhammad Ali (on horseback!)—hold on for the ride, because Black Cowboys of Rodeo will buck off every one of your preconceptions.”—Alexander Wolff, best-selling author of The Audacity of Hoop: Basketball and the Age of Obama


“Black Cowboys of Rodeo is a much-needed look at the lives of modern Black cowboys. For too long this story has been overlooked. But that omission stops with this book. Keith Ryan Cartwright takes readers on a journey from farm life in Oklahoma, to the Jim Crow south, the bright lights of Hollywood, and the streets of Harlem. Filled with stories of famous men like the legendary Bill Pickett and many other unheralded Black men who scraped their way to make a living in rodeo, Cartwright has produced a beautifully written manuscript about Black manhood.”—Louis Moore, best-selling author of We Will Win the Day: The Civil Rights Movement

“With the vivid, detailed portraits in Black Cowboys of Rodeo, Keith Ryan Cartwright not only chronicles a series of brave and pioneering lives; he also fills in a missing and vital piece of America’s cultural history.”—Alan Light, SiriusXM Host, best-selling author and former editor-in-chief of Vibe and Spin magazines


“There is nothing quite so tantalizing as hidden history. Remember what it felt like to be a young person, when it seemed like grownups were conspiring to hide the truth? In this case, they were. In reading a book like Black Cowboys of Rodeo, young people searching for identity find their heroes.”—Erin Alvarado, high school librarian and cofounder of the Southeastern Young Adult Book Festival