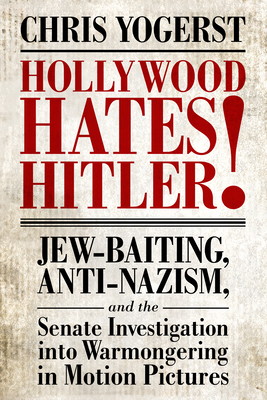 In September 1941, a handful of isolationist senators set out to tarnish Hollywood for warmongering. The United States was largely divided on the possibility of entering the European War, yet the immigrant moguls in Hollywood were acutely aware of the conditions in Europe. After Kristallnacht (the Night of Broken Glass), the gloves came off. Warner Bros. released the first directly anti-Nazi film in 1939 with Confessions of a Nazi Spy. Other studios followed with such films as The Mortal Storm (MGM), Man Hunt (Fox), The Man I Married (Fox), and The Great Dictator (United Artists). While these films represented a small percentage of Hollywood's output, senators took aim at the Jews in Hollywood who were supposedly "agitating us for war" and launched an investigation that resulted in Senate Resolution 152. The resolution was aimed at both radio and movies that "have been extensively used for propaganda purposes designed to influence the public mind in the direction of participation in the European War." When the Senate approved a subcommittee to investigate the intentions of these films, studio bosses were ready and willing to stand up against the government to defend their beloved industry. What followed was a complete embarrassment of the United States Senate and a large victory for Hollywood as well as freedom of speech.

Many works of American film history only skim the surface of the 1941 investigation of Hollywood. In Hollywood Hates Hitler Jew-Baiting, Anti-Nazism, and the Senate Investigation into Warmongering in Motion Pictures, author Chris Yogerst examines the years leading up to and through the Senate Investigation into Motion Picture War Propaganda, detailing the isolationist senators' relationship with the America First movement. Through his use of primary documents and lengthy congressional records, Yogerst paints a picture of the investigation's daily events both on Capitol Hill and in the national press.

Chris Yogerst is assistant professor of communication in the Department of Arts and Humanities at the University of Wisconsin-Milwaukee. He is author of From the Headlines to Hollywood: The Birth and Boom of Warner Bros. His work has appeared in such publications as the Washington Post, Los Angeles Review of Books, Journal of American Culture, and Historical Journal of Film, Radio, and Television.