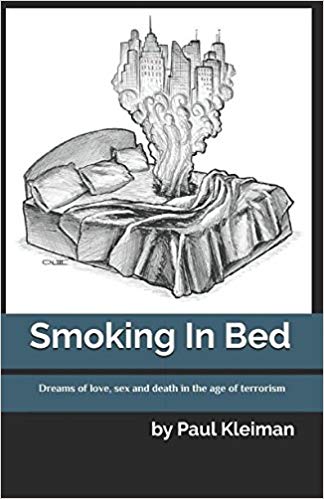 Have you ever had a dream that felt so real, you thought it was actually happening? You might not even be sure you’re asleep, dreaming, in your bed, it feels so authentic. If this happens repeatedly, due to a traumatic event or a change of medication, could one eventually become a bit confused about what is real and what is a dream? In “Smoking In Bed,” an adventurous, comedic, and occasionally tragic tale of life in the Big City, Phil has a sudden flood of dreams, night after night. Sure, he’d had some crazy dreams before, but these are at a whole other level. Some are full of symbolism. Some are indecipherable. Some are sexual in nature. Some feature appearances by Dick Cheney. In one particular series of dreams, Phil is intimately involved with a young woman he never met. The dream is so real, so perfect, nightly taking up where it left off, that Phil ends up feeling guilty because he’s engaged, and the dreams are so real, in his mind he’s cheating. But it’s a dream. Is that cheating? Of course not! And Phil’s a nice guy who would never cheat. Then he meets the dream-woman in real life. The one from his dream. And it turns out she’s having the same dream about him, from her point of view, though they had never met in real life. To complicate his confusion, more people, friends and otherwise, start coming in and out of his dreams, and Phil realizes that not only is he dreaming about them, they’re having the same dreams about him! So, are they coming in and out of his dream, or is he going in and out of theirs? Phil tells one especially vivid vision that he calls “The Oaf” to his friend Burt, who is inspired by it and asks if he can use the idea for a novel. Not wanting to be selfish, Phil says okay, but regrets it later when Burt writes a synopsis for a novel and gets a book deal, precisely what Phil feared would happen. So now, Phil is guilty because he’s “dream-cheating” on his fiancé Marika with a dream woman, who now is a real woman named Stephanie. He begins to doubt his relationship with his fiancé, and he hates himself for his envy about Burt’s success, which never would have happened without Phil’s dream! Now Burt will become a famous writer while Phil toils away in his meaningless job. As Phil tries to figure out what it all means and navigate through his feelings about his fiancé’s jealousy, his guilt, Burt’s novel deal, and his unfulfilling career, his long-absent mother drops in with her much younger, dot-com millionaire North African lover. She feels guilty about her disappearance from his life and wants to make it right. And then, everyone’s life is thrown into chaos and doubt by a tragic event, further blurring the already fuzzy lines between dreams and reality, and between life and death. And don’t forget Dick Cheney… Paul Kleiman received a B.A. in English literature from the University at Buffalo and studied poetry and writing with, among others, Galway Kinnell and E.L. Doctorow at NYU’s Graduate School of Arts and Sciences before graduating from the Cardozo School of Law. He has had careers as an attorney, musician, screenwriter, teacher and businessman. Paul’s artistic influences include Mark Twain, Kurt Vonnegut, Galway Kinnell, Jerry Garcia, and Eric Clapton.