We Showed Baltimore: The Lacrosse Revolution of the 1970s and Richie Moran's Big Red (Hardcover) 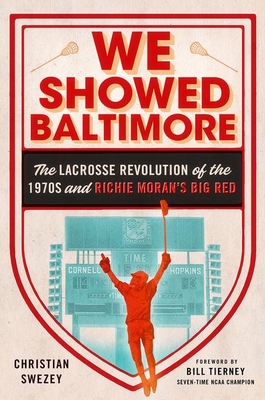 In We Showed Baltimore, Christian Swezey tells the dramatic story of how a brash coach from Long Island and a group of players unlike any in the sport helped unseat lacrosse's establishment.

From 1976 to 1978, the Cornell men's lacrosse team went on a tear. Winning two national championships and posting an overall record of 42-1, the Big Red, coached by Richie Moran, were the class of the NCAA game. Swezey tells the story of the rise of this dominant lacrosse program and reveals how Cornell's success coincided with and sometimes fueled radical changes in what was once a minor prep school game centered in the Baltimore suburbs.

Led on the field by the likes of Mike French and Eamon McEneaney, in the mid-1970s Cornell was an offensive powerhouse. Moran coached the players to be in fast, constant movement. That technique, paired with the advent of synthetic stick heads and the introduction of artificial turf fields, made the Cornell offensive game swift and lethal. It is no surprise that the first NCAA championship game covered by ABC Television was Cornell vs. Maryland in 1976. The 16-13 Cornell win, in overtime, was exactly the exciting game that Moran encouraged and that newcomers to the sport wanted to see.

Swezey recounts Cornell's dramatic games against traditional powers such as Maryland, Navy, and Johns Hopkins, and gets into the strategy and psychology that Moran brought to the team. We Showed Baltimore describes how the game of lacrosse was changing-its style of play, equipment, demographics, and geography. Pulling from interviews with more than ninety former coaches and players from Cornell and its rivals, We Showed Baltimore paints a vivid picture of lacrosse in the 1970s and how Moran and the Big Red helped create the game of today.