This Atom Bomb in Me (Paperback) 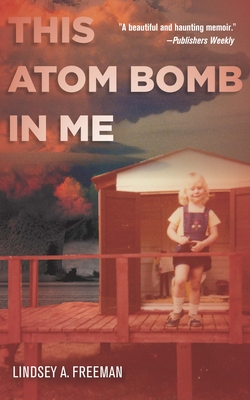 This Atom Bomb in Me traces what it felt like to grow up suffused with American nuclear culture in and around the atomic city of Oak Ridge, Tennessee. As a secret city during the Manhattan Project, Oak Ridge enriched the uranium that powered Little Boy, the bomb that destroyed Hiroshima. The city was a major nuclear production site throughout the Cold War, adding something to each and every bomb in the United States arsenal. Even today, Oak Ridge contains the world's largest supply of fissionable uranium.

The granddaughter of an atomic courier, Lindsey A. Freeman turns a critical yet nostalgic eye to the place where her family was sent as part of a covert government plan. Theirs was a city devoted to nuclear science within a larger America obsessed with its nuclear prowess. Through memories, mysterious photographs, and uncanny childhood toys, she shows how Reagan-era politics and nuclear culture irradiated the late twentieth century. Alternately tender and alarming, her book takes a Geiger counter to recent history, reading the half-life of the atomic past as it resonates in our tense nuclear present.

Lindsey A. Freeman is Assistant Professor of Sociology at Simon Fraser University and the author of Longing for the Bomb: Oak Ridge and Atomic Nostalgia (2015).