The Color of Creatorship: Intellectual Property, Race, and the Making of Americans (Paperback) 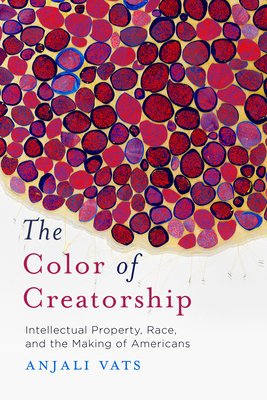 The Color of Creatorship examines how copyright, trademark, and patent discourses work together to form American ideals around race, citizenship, and property.

Working through key moments in intellectual property history since 1790, Anjali Vats reveals that even as they have seemingly evolved, American understandings of who is a creator and who is an infringer have remained remarkably racially conservative and consistent over time. Vats examines archival, legal, political, and popular culture texts to demonstrate how intellectual properties developed alongside definitions of the good citizen, bad citizen, and intellectual labor in racialized ways. Offering readers a theory of critical race intellectual property, Vats historicizes the figure of the citizen-creator, the white male maker who was incorporated into the national ideology as a key contributor to the nation's moral and economic development. She also traces the emergence of racial panics around infringement, arguing that the post-racial creator exists in opposition to the figure of the hyper-racial infringer, a national enemy who is the opposite of the hardworking, innovative American creator.

The Color of Creatorship contributes to a rapidly-developing conversation in critical race intellectual property. Vats argues that once anti-racist activists grapple with the underlying racial structures of intellectual property law, they can better advocate for strategies that resist the underlying drivers of racially disparate copyright, patent, and trademark policy.