One of Us: The Story of a Massacre in Norway - And Its Aftermath (MP3 CD) 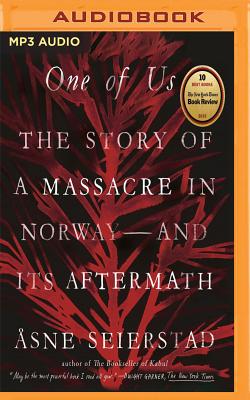 A harrowing and thorough account of the massacre that upended Norway, and the trial that helped put the country back together.

On July 22, 2011, Anders Behring Breivik detonated a bomb outside government buildings in central Oslo, killing eight people. He then proceeded to a youth camp on the island of Utoya, where he killed 69 more, most of them teenage members of Norway's governing Labour Party. In One of Us, the journalist Asne Seierstad tells the story of this terrible day and what led up to it. What made Breivik, a gifted child from an affluent neighborhood in Oslo, become a terrorist?

As in her best seller The Bookseller of Kabul, Seierstad excels at the vivid portraiture of lives under stress. She delves deep into Breivik's troubled childhood, showing how a hip-hop and graffiti aficionado became a right-wing activist and Internet game addict, and then an entrepreneur, Freemason, and self-styled master warrior who sought to "save Norway" from the threat of Islam and multiculturalism. She writes with equal intimacy about Breivik's victims, tracing their political awakenings, aspirations to improve their country, and ill-fated journeys to the island. By the time Seierstad reaches Utoya, we know both the killer and those he will kill. We have also gotten to know an entire country - famously peaceful and prosperous, and utterly incapable of protecting its youth.