Walking with Sam: A Father, a Son, and Five Hundred Miles Across Spain (Hardcover) 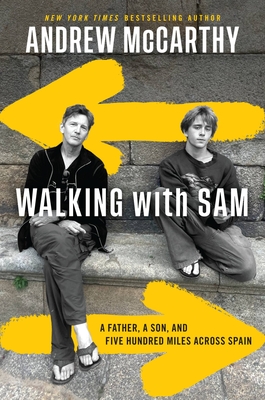 An intimate, funny, and poignant travel memoir following New York Times bestselling author and actor Andrew McCarthy as he walks the Camino de Santiago with his son Sam in an effort to get to know each other as adults.

When Andrew McCarthy's eldest son began to take his first steps into adulthood, McCarthy found himself wishing time would slow down. Looking to create a more meaningful connection with Sam before he fled the nest, as well as recreate his own life-altering journey decades before, McCarthy decided the two of them should set out on a trek like few others: 500 miles across Spain's Camino de Santiago.

Over the course of the journey, the pair traversed an unforgiving landscape, having more honest conversations in five weeks than they'd had in the preceding two decades.  Discussions of divorce, the trauma of school, McCarthy's difficult relationship with his own father, fame, and Flaming Hot Cheetos threatened to either derail their relationship or cement it.  WALKING WITH SAM captures this intimate, candid and hopeful expedition as the father son duo travel across the country and towards one another.

Andrew McCarthy is the author of three books, Brat: An '80s Story, Just Fly Away, and The Longest Way Home — all New York Times best sellers. He is an award winning travel writer and served for a dozen years as an editor-at-larger at National Geographic Traveler magazine. Best known as an actor for the past four decades, Andrew has appeared in such iconic films as Pretty in Pink and Less Than Zero. He lives in New York.