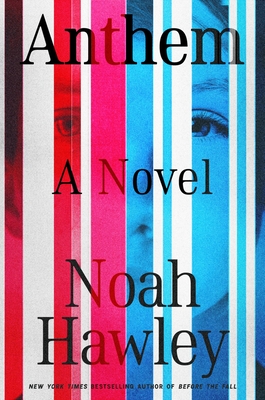 The first big novel of 2022: an epic literary thriller set where America is right now, in which a band of unlikely heroes sets out on a quest to save one innocent life—and might end up saving us all.

Something is happening to teenagers across America, spreading through memes only they can parse.

At the Float Anxiety Abatement Center, in a suburb of Chicago, Simon Oliver is trying to recover from his sister’s tragic passing. He breaks out to join a woman named Louise and a man called The Prophet on a quest as urgent as it is enigmatic. Who lies at the end of the road? A man known as The Wizard, whose past encounter with Louise sparked her own collapse. Their quest becomes a rescue mission when they join up with a man whose sister is being held captive by the Wizard, impregnated and imprisoned in a tower.

Noah Hawley’s new novel is an adventure that finds unquenchable lights in dark corners.  Unforgettably vivid characters and a plot as fast and bright as pop cinema blend in a Vonnegutian story that is as timeless as a Grimm’s fairy tale.  It is a leap into the idiosyncratic pulse of the American heart, written with the bravado, literary power, and feverish foresight that have made Hawley one of our most essential writers.

Award‑winning author Noah Hawley is one of the most accomplished auteurs and versatile storytellers working in television, film and literature. Over the course of his more than 20-year career, Hawley's work as a novelist, screenwriter, series creator, showrunner and director has garnered acclaim—winning an Emmy®, Golden Globe®, PEN, Critics’ Choice, and Peabody Award. As a bestselling author, Hawley has published six novels: A Conspiracy of Tall Men, Other People’s Weddings, The Punch, The Good Father, Before the Fall and the upcoming Anthem.

PRAISE FOR BEFORE THE FALL:

"[A] terrific thriller . . . an irresistible mystery . . . a tale that's both an intriguing puzzle and a painful story of human loss."—Washington Post

"Savvy and absorbing . . . cathartic . . . BEFORE THE FALL is about the gulf that separates perception and truth."—Wall Street Journal

“A mesmerizing, surprise-jammed mystery that works purely on its own, character-driven terms.”

"A masterly blend of mystery, suspense, tragedy, and shameful media hype . . . a gritty tale of a man overwhelmed by unwelcome notoriety, with a stunning, thoroughly satisfying conclusion."—Publishers Weekly

"I started and finished BEFORE THE FALL in one day. That begins to tell you what kind of smart, compellingly dramatic read it is. So read it."—James Patterson, #1 New York Times bestselling author

"This is one of the year's best suspense novels, a mesmerizing, surprise-jammed mystery that works purely on its own, character-driven terms . . . Mr. Hawley has made it very, very easy to race through his book in a state of breathless suspense."—New York Times

"BEFORE THE FALL is a ravishing and riveting beauty of a thriller. It's also a deep exploration of desire, betrayal, creation, family, fate, mortality, and rebirth. It's one part Dennis Lehane, one part Dostoevsky. I was spellbound from first page to last; I haven't fully recovered yet."—Michael Cunningham, Pulitzer Prize-winning author of The Hours

"Noah Hawley really knows how to keep a reader turning the pages, but there's more to the novel than suspense. On one hand, BEFORE THE FALL is a complex, compulsively readable thrill ride of a novel. On the other hand, it is an exploration of the human condition, a meditation on the vagaries of human nature, the dark side of celebrity, the nature of art, the power of hope and the danger of an unchecked media. The combination is a potent, gritty thriller that exposes the high cost of news as entertainment and the randomness of fate."—Kristin Hannah, New York Times Book Review

"Imagine that Agatha Christie had set a closed-room mystery on an airplane and included Wall Street and entertainment executive types in her lineup of suspects. Now imagine that airplane crashing into the Atlantic before the story even gets going....Mr. Hawley, the expert TV showrunner, obviously had the skills to pull this off."—New York Times

"BEFORE THE FALL is an astonishing, character-driven tour-de-force. The story is a multi-layered, immersive examination of truth, relationships, and our unquenchable thirst for the media's immediate explanation of unfathomable tragedy."—Karin Slaughter, #1 internationally bestselling author

"BEFORE THE FALL kicks ass. A surefire summer read."
—Justin Cronin, New York Times bestselling author of The Passage and City of Mirrors

"Like the successful screenwriter that he is, Hawley piles on enough intrigues and plot complications to keep you hooked."—Kirkus

"This isn't just a good novel; it's a great one. I trusted no one in these pages, yet somehow cared about them all. BEFORE THE FALL brings a serrated edge to every character, every insight, and every wicked twist."—Brad Meltzer, bestselling author of The President's Shadow

"Noah Hawley soon veers his highly entertaining novel into an insightful look at families, revenge and media intrusion...Hawley invests the same care with a soupcon of dark humor into BEFORE THE FALL as he does on the TV series 'Fargo'...superb and cleverly constructed."—Associated Press

"A remarkable and memorable accomplishment by any standard...BEFORE THE FALL is brilliantly constructed and wonderfully told.... a tale that will haunt you long after you read the last page, even as you wish the narrative was twice as long, for all the right reasons."—Book Reporter

"Abundant chills and thrills...Noah Hawley's novel grabs you by the throat and won't let go...BEFORE THE FALL is storytelling at its best, as Hawley presents a range of diverse characters with rich histories... Seeds of doubt are cast in what is sure to be the summer book you won't want to miss."—The Missourian

"In the hands of a writer like Noah Hawley, who knows how to build tension from mundane moments, it is a remarkable thriller that most readers will find difficult to put down...it moves toward a breathless ending."—The Washington Times

"A complex exploration of human nature in an age of celebrity."—Pittsburgh Post-Gazette

"Won [our] hearts and minds...it will be the big talker of the summer."—New York Post, "Summer's Hottest Reads"

"[The] thriller of the summer."—The Baltimore Sun

"The crash and the flashbacks recall Lost and Thornton Wilder's Pulitzer-winning novel, The Bridge Over San Luis Rey, and Scott's travails are the lot of every hero in a conspiratorial thriller going back to The 39 Steps."—Slate

"BEFORE THE FALL will seize you on the first page and never let you go, as you follow the story of a plane crash and the complicated and confusing investigation about why it happened."—Vanity Fair, "The 5 Must-Read Books for the Last Five Weeks of Summer"

"A thoughtful and compelling page-turner....Hawley's writing is taut and clear, his characters richly developed...Readers may be moved to stand up and cheer."—New York Journal of Books

"A literary suspense novel with both a brain and a heart, Before the Fall is a searing examination of the nature of truth. With masterful character development and a well-sculpted plot line, Hawley takes us on a thrill ride of a story while raising vital questions about the role and responsibility of the media today."—Powells, "1 of 10 books sent to President Elect Trump"

"This fast-paced suspense novel by the creator of Fargo will keep you on the edge of your seat."—People

"Brimming with three-dimensional characters, BEFORE THE FALL leads the reader down rabbit hole after rabbit hole in an electrifying mystery."—PasteMagazine.com, "Best Novels of 2016"

"Noah Hawley's BEFORE THE FALL isn't a typical mystery. Perhaps that's why I couldn't put it down."—TheAtlantic.com

"A read-in-one-beach-day kind of book...A true page-turner, BEFORE THE FALL will leave you guessing until the final moments of the crash, and the final pages of the book."—Bustle

"At the start of this grim, thought-provoking near-future thriller from Hawley (Before the Fall), five Wisconsin teenagers die by suicide in less than two weeks, each writing "A11" somewhere near where their bodies are found. The plague spreads nationwide and then internationally, creating a mind-numbing death count. Adults struggle to understand what's happening, some theorizing that the fatalities are a consequence of the Covid pandemic's social isolation. Many fear the suicides represent an "act of collective surrender" presaging the extinction of humanity. Meanwhile, 15-year-old Simon Oliver, who found his older sister dead from overdosing on the opioids their family business manufactured, is told by a fellow resident of the Float Anxiety Abatement Center near Chicago, who calls himself the Prophet, that Oliver is central to establishing a new utopia to be started by children to save the species and the planet. Oliver joins the Prophet and some others in escaping from Float to realize the Prophet's vision. From the ominous sentence that opens the main narrative ("The summer our children began to kill themselves was the hottest in history"), the author creates an all-too-plausible dystopia rendered believable through matter-of-fact prose. Hawley makes this sing by combining the social commentary of a Margaret Atwood novel with the horrors of a Stephen King book. Agent: Susan Golomb, Writers House. (Jan.)"—Publisher's Weekly (starred review)

"It begins with the suicide of 15-year-old Simon’s older sister, Claire, an act that presages a global wave of children’s suicides, numbering 1,000 per day. Devastated by his sister’s death, Simon is sent to Float, an adolescent center for anxiety. There he meets a Black teenager named Louise, who is 15, and a strange boy named Paul, who is 14 and calls himself the Prophet, claiming he receives messages from God, one of which asserts that He has a mission for Simon—the boy will be instrumental in building a new utopia. With that purpose, the three teens escape from Float. En route to their destiny, they set about rescuing a teenage girl, Bathsheba, from the so-called Wizard, billionaire E. I. Mobley, the sixth richest man in the world, who has a penchant for violating pubescent girls. Meanwhile, hordes of insurrectionists rise up to overthrow the government, launching a violent, epic Manichean war between good and evil. The apocalypse, it seems, is just around the corner. Yes, in Anthem, Hawley has written some of the most savage satire since Jonathan Swift, creating a ridiculous world in which only the young are viable. The plot-rich, cinematic story moves swiftly and compellingly, exciting reader interest and empathy. Anthem is truly an epic adventure."—Booklist (starred review)