The House Next Door (Mass Market) 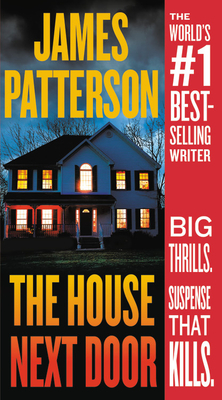 By James Patterson
$9.99
Usually arrives at our store within 4-7 days

An affair spirals out of control, a detective investigates four mysterious disappearances, and a mysterious message from space leads to a manhunt in these three electrifying thrillers from the world's #1 bestselling writer.
The House Next Door (with Susan DiLallo): Married mother of three Laura Sherman was thrilled when her new neighbor invited her on some errands. But a few quick tasks became a long lunch -- and now things could go too far with a man who isn't what he seems . . .
The Killer's Wife (with Max DiLallo): Four girls have gone missing. Detective McGrath knows the only way to find them is to get close to the suspect's wife . . . maybe too close.
We. Are. Not. Alone. (with Tim Arnold): The first message from space will change the world. It's first contact: undeniable proof of alien life. Disgraced Air Force scientist Robert Barnett found it. Now he's the target of a desperate nationwide manhunt -- and Earth's future hangs in the balance.

James Patterson is the world's bestselling author and most trusted storyteller. He has created many enduring fictional characters and series, including Alex Cross, the Women's Murder Club, Michael Bennett, Maximum Ride, Middle School, and I Funny. Among his notable literary collaborations are The President Is Missing, with President Bill Clinton, and the Max Einstein series, produced in partnership with the Albert Einstein Estate. Patterson's writing career is characterized by a single mission: to prove that there is no such thing as a person who "doesn't like to read," only people who haven't found the right book. He's given over three million books to schoolkids and the military, donated more than seventy million dollars to support education, and endowed over five thousand college scholarships for teachers. The National Book Foundation recently presented Patterson with the Literarian Award for Outstanding Service to the American Literary Community, and he is also the recipient of an Edgar Award and six Emmy Awards. He lives in Florida with his family.

"Patterson is a master."
—Toronto Globe and Mail