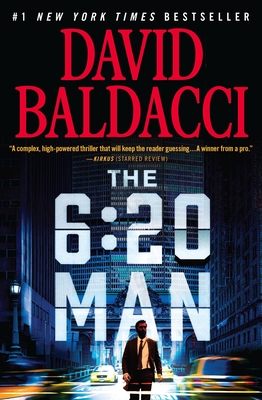 A cryptic murder pulls a former soldier turned financial analyst deep into the corruption and menace that prowl beneath the opulent world of finance, in this #1 New York Times bestselling thriller from David Baldacci.

Every day without fail, Travis Devine puts on a cheap suit, grabs his faux-leather briefcase, and boards the 6:20 commuter train to Manhattan, where he works as an entry-level analyst at the city’s most prestigious investment firm. In the mornings, he gazes out the train window at the lavish homes of the uberwealthy, dreaming about joining their ranks. In the evenings, he listens to the fiscal news on his phone, already preparing for the next grueling day in the cutthroat realm of finance. Then one morning Devine’s tedious routine is shattered by an anonymous email: She is dead.

Sara Ewes, Devine’s coworker and former girlfriend, has been found hanging in a storage room of his office building—presumably a suicide, at least for now—prompting the NYPD to come calling on him. If that wasn’t enough, before the day is out, Devine receives another ominous visit, a confrontation that threatens to dredge up grim secrets from his past in the army unless he participates in a clandestine investigation into his firm. This treacherous role will take him from the impossibly glittering lives he once saw only through a train window, to the darkest corners of the country’s economic halls of power . . . where something rotten lurks. And apart from this high-stakes conspiracy, there’s a killer out there with their own agenda, and Devine is the bull’s-eye.

DAVID BALDACCI is a global #1 bestselling author, and one of the world's favorite storytellers. His books are published in over forty-five languages and in more than eighty countries, with 150 million copies sold worldwide. His works have been adapted for both feature film and television. David Baldacci is also the cofounder, along with his wife, of the Wish You Well Foundation, a nonprofit organization dedicated to supporting literacy efforts across America. Still a resident of his native Virginia, he invites you to visit him at DavidBaldacci.com and his foundation at WishYouWellFoundation.org.

"A complex, high-powered thriller that will keep the reader guessing . . . This is a winner from a pro."—Kirkus, Starred Review

"Corporate conspiracies, corruption, and murder—all come together in one of thriller fans’ most anticipated books of the summer . . . Baldacci’s experience in this genre truly shines as he builds complex layers of riveting twists and turns to keep you on the edge of your seat!"—Reader's Digest