The Wind at My Back: Resilience, Grace, and Other Gifts from My Mentor Raven Wilkinson (Hardcover) 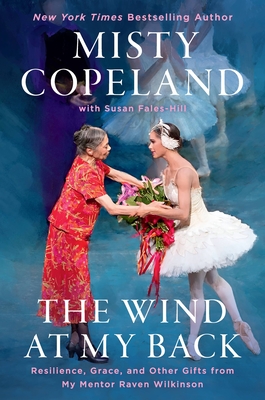 From celebrated ballerina and New York Times bestselling author Misty Copeland, a heartfelt memoir about her friendship with trailblazer Raven Wilkinson which captures the importance of mentorship, shared history, and honoring the past to ensure a stronger future.

Misty Copeland made history as the first African-American principal ballerina at the American Ballet Theatre. Her talent, passion, and perseverance enabled her to make strides no one had accomplished before. But as she will tell you, achievement never happens in a void. Behind her, supporting her rise was her mentor Raven Wilkinson. Raven had been virtually alone in her quest to breach the all-white ballet world when she fought to be taken seriously as a Black ballerina in the 1950s and 60s. A trailblazer in the world of ballet decades before Misty’s time, Raven faced overt and casual racism, hostile crowds, and death threats for having the audacity to dance ballet.

The Wind at My Back tells the story of two unapologetically Black ballerinas, their friendship, and how they changed each other—and the dance world—forever. Misty Copeland shares her own struggles with racism and exclusion in her pursuit of this dream career and honors the women like Raven who paved the way for her but whose contributions have gone unheralded. She celebrates the connection she made with her mentor, the only teacher who could truly understand the obstacles she faced, beyond the technical or artistic demands.

A beautiful and wise memoir of intergenerational friendship and the impressive journeys of two remarkable women, The Wind at My Back captures the importance of mentorship, of shared history, and of respecting the past to ensure a stronger future.

Misty Copeland is a Principal Dancer at American Ballet Theatre, the author of the New York Times bestselling memoir Life in Motion, diet and fitness guide Ballerina Body, and the award-winning Children's book, Firebird. She made her Broadway debut in 2015's "On The Town", putting a show that had reportedly been suffering financially for months into the Broadway Box Office Top Ten for the two weeks that she guest-starred as "Ivy Smith." She's been featured in the New York Times, on 60 Minutes, and she was named one of SELF Magazine's "Best Bodies of 2014" and Time Magazine's 100 Most Influential People.

"Having a contemporary ballerina tell the story of one of the great pioneers of our art form and bear witness to their mutual love and respect is so moving. I laughed, I reminisced, I cried….A definite must read!!!”—Lauren Anderson, Associate Director of Education & Community Engagement and former principal dancer at Houston Ballet