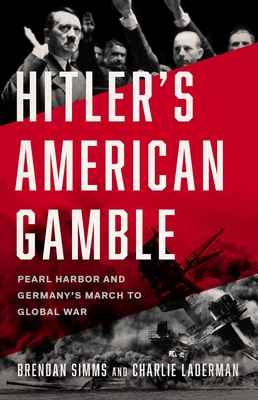 A riveting account of the five most crucial days in twentieth-century diplomatic history: from Pearl Harbor to Hitler’s declaration of war on the United States

By early December 1941, war had changed much of the world beyond recognition. Nazi Germany occupied most of the European continent, while in Asia, the Second Sino-Japanese War had turned China into a battleground. But these conflicts were not yet inextricably linked—and the United States remained at peace.

Hitler’s American Gamble recounts the five days that upended everything: December 7 to 11. Tracing developments in real time and backed by deep archival research, historians Brendan Simms and Charlie Laderman show how Hitler’s intervention was not the inexplicable decision of a man so bloodthirsty that he forgot all strategy, but a calculated risk that can only be understood in a truly global context. This book reveals how December 11, not Pearl Harbor, was the real watershed that created a world war and transformed international history.

Brendan Simms is a professor in the history of international relations and fellow at Cambridge. He is the author of many books, including Europe and Hitler. He lives in Cambridge, UK.

Charlie Laderman is a senior lecturer in international history in the war studies department at King’s College, London. He is the author of books on US-UK foreign policy, including Sharing the Burden. He lives in London.

“[An] absorbing new book… The greatest strength of Simms and Laderman’s book is its success in accomplishing something supremely difficult: It reminds us how contingent even the most significant historical events can be, how many other possibilities lurked beyond the familiar ones that actually happened – and how even the greatest leaders often have only a shaky grasp of what is happening… Simms and Laderman give us a visceral sense of these events as they unfolded, in real time, with historical actors not always quite sure what was happening – a dimension of history that is both crucial and fiendishly difficult to recover.”
—New York Times Book Review

“An engaging and insightful account of the forces that shaped Hitler’s fateful decision.”—Wall Street Journal

"An extraordinary reconstruction of the fateful week following Pearl Harbor."—Adam Tooze, The Guardian

“[A] crisp and pacey analysis.” —David Reynolds, The New Statesman

“In a detailed reconstruction of the events of those few days, illuminating the importance of confusion, chance, and choice in the stream of history, Simms and Laderman explain that Hitler assumed that war with the United States was inevitable…”—Foreign Affairs

“In this fascinating book, which combines detailed analysis with a page turning account of the day by day shifts in Berlin, Washington, London and Tokyo, the story of that extraordinary and, as it turned out, fatal decision by Hitler – the ‘American gamble’ of the title – is laid out in detail. … [a] stimulating book.”—Rana Mitter, Literary Review

"A fast-moving, even gripping story that informs as well as enlightens."—New York Journal of Books

"Unquestionably one of the most compelling and eye-opening monographs on World War II in recent memory.”—American History

"Brendan Simms and Charlie Laderman's collaborative work is as gripping as it is well researched.... Simms and Laderman have created a truly thought provoking book."—Aspects of History

“[A] fresh angle on the buildup to WWII.”—Publishers Weekly

“A meticulous historical account of 'five momentous days' at the beginning of World War II…. An excellent argument that America’s WWII began on Dec. 11, 1941.”—Kirkus

"The pay off from Simms and Laderman’s meticulous blow by blow account is to sharpen our sense of how vertiginously contingent the escalation to global war seemed in the second week of December 1941, even as it was happening."
—Adam Tooze, Chartbook

"Simms and Laderman...chart these historic developments with an amalgam of skill, knowledge and style."—Sheldon Kirshner, Times of Israel

“This is history at its scintillating best. The fate of the world tilted on the decisions made in those few days—hours even—in December 1941, and Simms and Laderman brilliantly strip away the many myths surrounding them in this hard-hitting, revelatory, and superbly researched work.”
—Andrew Roberts, author of Churchill: Walking with Destiny

“Brendan Simms and Charlie Laderman show how Hitler’s mad decision to declare war on the United States on December 11, 1941 proved suicidal for the Axis, ensured a global catastrophe, and would radically redefine how World War II would end. And yet was Hitler really as unhinged and reckless as it has seemed? Warring with America was predictably consistent with the Nazi’s Final Solution ideology. It was consistent with Germany’s allegiance with Japan and the idea of Americans and British suddenly bogged down in a  new two-front war—and at the time seen as far more strategically advantageous than allowing a neutral America to continue to supply Germany’s enemies, the British Empire and Soviet Union. Hitler’s American Gamble is revisionist, but in the best sense of sound research, rare originality, singular analysis, and riveting prose.”
—Victor Davis Hanson, the Hoover Institution, Stanford University, author of The Second World Wars

“All too often, historians narrate the past as if the end were preordained at the beginning. But history is not a novel or a play; it is more like a big game, in which the difference between victory and defeat depends on split-second decisions and hair’s breadths. In Hitler’s American Gamble, Brendan Simms and Charlie Laderman grippingly retell the story of five days that not only shook but also shaped the world—the days between the Japanese attack on Pearl Harbor (December 7, 1941) and Hitler’s declaration of war on the United States (December 11). All students of both World War II and the Holocaust will learn, as I did, from their careful use of neglected documents and their attention to ‘counterfactuals’ that, for contemporaries, were at least as likely as what actually happened.”
—Niall Ferguson, Milbank Family Senior Fellow, the Hoover Institution, and author of The War of the World

“The greatest grand strategic blunder of all time may well have been Nazi Germany’s declarations of war, within six months in 1941, on both the Soviet Union and the United States. ‘Don’t try this at home,’ I’ve always told my students, but I’ve never been able to explain to them why Hitler chose to. Brendan Simms and Charlie Laderman have now come to the rescue with a rare achievement: a microhistory that’s global in scope. Filled with fresh insights, excitingly written, and meticulously documented, Hitler’s American Gamble is sure to become an instant classic.”
—John Lewis Gaddis, Yale University

“Hitler’s American Gamble is a thrilling and authoritative study of five crucial days in the Second World War: December 7–11, 1941. Using a wide array of hitherto-neglected sources and their own deep understanding of the period, Laderman and Simms provide an altogether outstanding account of what transpired between the Pearl Harbor attack and Hitler’s declaration of war against the United States. A gripping tale, expertly told.”
—Fredrik Logevall, author of Embers of War

“This outstanding book by two of the best historians around revolutionized what I thought I knew about strategy by the Axis powers and how it shaped post-war order. Written like a thriller, it pulls you along breathlessly as Hitler makes his fateful decision.”
—Dr. Kori Schake, senior fellow and director of foreign and defense policy studies, American Enterprise Institute