Money: The True Story of a Made-Up Thing (Compact Disc) 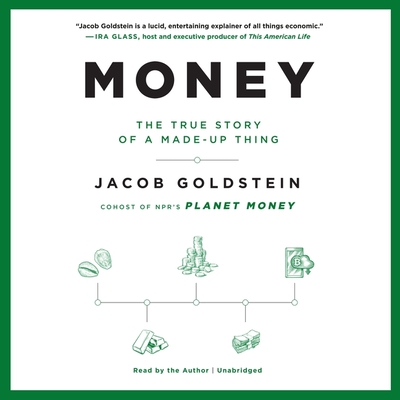 Co-host of the popular NPR podcast Planet Money provides a well-researched, entertaining, somewhat irreverent look at how money is a made-up thing that has evolved over time to suit humanity's changing needs.

What is money anyway, and where and why did it originate? According to Jacob Goldstein, this made-up thing has evolved over centuries and takes different forms based on technological advances, the needs of society, and often the crazy ideas of outliers on the fringes. Told through witty, historical anecdotes, Goldstein demystifies this ever-evolving tool from the invention of the first coins in Mesopotamia, to how China invented paper money centuries before it appeared in the west, how at one point in Sweden men carried giant coins on their backs to pay for goods, to the gold standard, pound sterling, origins of the Euro, mutual funds, bitcoin and a cashless society. Money presents entertaining tales of fascinating characters who fundamentally changed our monetary systems such as Genghis Khan, John Law, a convicted murderer and professional gambler, the Luddites, and the anarchist cyberpunks who created bitcoin. Through these major movements we see the rise and fall of various financial institutions: central banks, the stock market, the Federal Reserve, and the shadow institutions like Lehman Brothers that helped create the financial crisis of 2008. Lively and accessible and full of interesting tidbits (the word banker comes from the Venetian bench sitters-or banchieri-of the 1600s who guarded the gold) Goldstein looks at the evolution of money (whose definition appears to be, if we all agree it's money, then it is money) and confronts its true purpose and who it is supposed to be for.