The Red Parts: Autobiography of a Trial (Paperback) 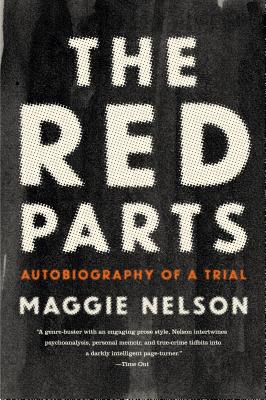 “If I could read the work of only one writer for the rest of my life, I think I would be happy to spend the rest of my days in the staggering beauty of Nelson's prose. In The Red Parts, what could have merely been a relatively interesting true crime narrative becomes, instead, a wholly original memoir of pain, history, family, and those bright moments of clarity in a world that, for Nelson, had become so dark. This book asks us to wonder, to be angry, and ultimately to become more human. This is an inescapable, utterly compelling read.”
— Claire Tobin, Literati Bookstore, Ann Arbor, MI

Late in 2004, Maggie Nelson was looking forward to the publication of her book Jane: A Murder, a narrative in verse about the life and death of her aunt, who had been murdered thirty-five years before. The case remained unsolved, but Jane was assumed to have been the victim of an infamous serial killer in Michigan in 1969.

Then, one November afternoon, Nelson received a call from her mother, who announced that the case had been reopened; a new suspect would be arrested and tried on the basis of a DNA match. Over the months that followed, Nelson found herself attending the trial with her mother and reflecting anew on the aura of dread and fear that hung over her family and childhood--an aura that derived not only from the terrible facts of her aunt's murder but also from her own complicated journey through sisterhood, daughterhood, and girlhood.

The Red Parts is a memoir, an account of a trial, and a provocative essay that interrogates the American obsession with violence and missing white women, and that scrupulously explores the nature of grief, justice, and empathy.

Maggie Nelson is a poet, a critic, and the author of several nonfiction books, including The Argonauts, The Art of Cruelty: A Reckoning, Bluets, and Jane: A Murder. She teaches in the School of Critical Studies at CalArts and lives in Los Angeles, California.

Available for the first time in paperback

“Alternating between a narrative of the trial and a rambling exploration of her own life, Nelson examines the many stereotypes and clichés of murder, making it seem that no subject could possibly be more embedded in the American consciousness. . . . Nelson is refreshingly self-critical—of herself and her writing project.”—The New York Times Book Review

“It’s Nelson’s articulation of her many selves—the poet who writes prose; the memoirist who considers the truth specious; the essayist whose books amount to a kind of fairy tale, in which the protagonist goes from darkness to light, and then falls in love with a singular knight—that makes her readers feel hopeful.”—Hilton Als, The New Yorker

“Her quivering, precise ethical sensitivity is everywhere at work, worrying, probing, discerning. . . . Nelson's resistance to the easy answer, her willingness to reach a kind of conclusion and then to break it, to probe further and further, to ask about her own complex and not entirely noble intentions instead of facilely condemning others, make The Red Parts an uneasy masterpiece.”—NPR.org

“The Red Parts is meandering and diaristic, plunging us into a story as it happens. We sit beside Nelson and share her bewilderment, and by the end of the book we are forced to recognize that this is one of the greatest gifts an author can provide us: the chance to admit that we do not know what we think.”—Elle.com

“Graywolf Press has done a great service to readers by re-publishing The Red Parts in 2016. . . . In a cultural moment in which true crime narrative—Serial, Making a Murderer, The Jynx, etc.—has reached an especially hypnotizing level, Nelson’s book powerfully reminds us of the wrecked lives that violence leaves in its wake.” —Electric Literature

“Every bit as gripping as a true-crime book, but infinitely more complex and rewarding.”—Vulture

“[Maggie Nelson’s The Red Parts is] an enthralling personal story-slash-true-crime-book that just happens to be written by one of the most thoughtful writers of our time.”—Esquire

"There’s no one quite like Maggie Nelson writing right now. . . . We are lucky to have her.”—Bookriot

“A book you take in like air until your last breath — it's life around death — the thoughts that fill the time around tragedy and those thoughts that follow. Floating along the lines of reality and the surreal, you don't want it to end.”—Lonny

“Grief and fear are not eradicated, but bluntly confronted. ‘Justice’ is constantly in question. Each chapter startles then reverberates with Nelson’s poetic language. . . . [The Red Parts] challenges an often misogynistic, and unfortunately familiar, origin.”—Kirkus Reviews

"The story blossoms into a meditation on memory, the fallibility of forensics, the grieving process, the justice system, and much more. . . . Nelson's account is both riveting and nuanced. The result is like Making a Murderer as told by Joan Didion—a breathtaking and discomfiting experience that will stay with readers well beyond the latest true crime fad."—Bust Magazine

“The Red Parts has none of the trappings of a whodunit. It doesn’t look for answers, it just looks unflinchingly at the wreckage, the loss, the love and the fear. It bears witness.”—The Rumpus

“[In The Red Parts] there are haunting meditations on mortality and motion, leading to some achingly beautiful lyrical imagery. . . . It’s a haunting story of the aftermath of a death, but it’s also a powerful examination of numerous aspects of life.”—Star Tribune (Minneapolis)

“Blending a poet's passion and a journalist's cool eye, Nelson (The Art of Cruelty) has produced a distinctive story of an otherwise ordinary family's encounter with unspeakable violence.”—Shelf Awareness

“Nelson’s voice is as magnetic as ever . . . an excellent reading experience.”—Newsday

“Nelson’s account is lucid, her head clear, and her writing strong. Memories of her childhood—particularly of her father, who died when she was a girl—are the most emotionally charged elements. But her wry and honest account of the clownish calamity of the courtroom and the impending media circus (Nelson was on 48 Hours Mystery) are also affecting. . . . A much-needed reminder of the long, painful aftermath of heinous crimes.”—Booklist

“The Red Parts feels rushed, frenzied—in a positive, powerful way. While the re-opening of Jane’s case provides a plot, the book is also an autopsy, an examination (both implicit and explicit) on our cultural fascination with voyeurism, death, sex, and misogyny. . . . In sum, The Red Parts is a tour de force.”—Pop Matters

“Nelson’s cathartic narrative encompasses closure of unrelated events in her own life, such as mourning her dead father, dealing with a recent heartache and reconciling with her once-wayward sister. Her narrative is wrenching.”—Publishers Weekly

“A book-long riff on the first-person essay that Joan Didion built. . . . Nelson eschews tidy resolution. She argues that stories are by nature imperfect—and yet she also shows us how they can become totally worthwhile.”—Time Out

"Part memoir, part chronicle, part philosophical essay, all written in an elegiac but impeccably controlled tone that reminds me of Joan Didion's The Year of Magical Thinking—[The Red Parts] explores why Nelson began writing about Jane in the first place, which then becomes a rumination on how we spend life arm-wrestling with death."—Milwaukee Journal Sentinel

“[Nelson] has done the impossible, she has taken this mess, this bone-chilling grossness, this sadness, this anger, and consolidated into something to exist in the world as a memorial for Jane. The Red Parts is written with a fierceness and a powerful eye.”—Your Magazine Emerson

“The Red Parts is the most enthralling memoir-slash-true-crime-book, but written by one of the greatest writers of our time.”—The Maris Review

“The Red Parts is the prose account of the ensuing trial, its actors, and its history. Interwoven with Nelson’s singularly powerful insights, asides, and framing devices, it amounts to so much more than a family drama. Psychoanalysis, art, true crime, literature, and memoir all become colours in Nelson’s palette. The resulting work is mural sized and metastasizing, as well as having the crystalline, zoomed-in, cutting-edge perfection of a poet’s power with image. It is a deeply personal account of a family’s grief, a wound reopened after 35 years.”—NUVO (Canada)

“Very rarely does a book come along that combines such extraordinary lyricism and ethical precision with the sense that the author is writing for her very life. The Red Parts is one of these. At every turn of this riveting, genre-defying account, Nelson refuses complacency and pushes further into the unknown. A necessary, austere, and deeply brave achievement.”—Annie Dillard

“The beauty and importance of The Red Parts derives not only from Nelson’s astonishing skill with language, but from the bravery, generosity, and painstaking honestly with which she approaches her hard subject and her hard-won understanding of it.”—Matthew Sharpe

“The Red Parts is a riveting read—Didion-esque in its tough clarity, its understatement, and its sheen. Like any great memoirist, Maggie Nelson is a born trespasser, with an exquisitely calibrated moral conscience. From the nightmare she has constructed indelible literature.”—Wayne Kostenbaum